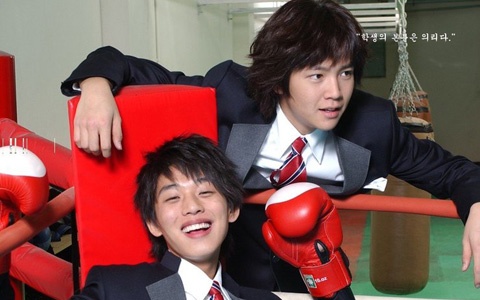 Jang Geun Suk Warns, "Yoo Ah In, Are You Watching Me?"

While posing for photographs in a café during an interview with Joynews, Jang Geun Suk shouted in a joking taunt, “Yoo Ah In, are you watching me?”

Both aged 24, the two have met much earlier in their careers, having starred in a “Skoolooks” school uniform commercial in 2005.

Other similarities include how both have very strong individualistic personalities and fashion styles. Earlier, Jang Geun Suk also revealed that Yoo Ah In is the same-age actor that he is most concerned about at the moment. Of course, the increased concern for Yoo Ah In could be due to the latter’s movie “Punch” (Korean name: Wandeuk-ie), which is the current no.1 box office hit, for three weeks running. Jang Geun Suk’s upcoming movie, “You’re My Pet,” co-starring Kim Ha Neul, will hit the theaters on Nov 10.

Indeed, while drumming up support for the movie, this natural PR guru urged, “Please, you must write that ‘I want to become everybody’s pet.’” Jang Geun Suk is indisputably the most effective spokesperson for “You’re My Pet,” with his smiles on and off the set as the biggest source of strength to the movie. Throughout the interview, Jang Geun Suk was charming – not only because he was so sure of what he wanted and so confident of his own strengths that it becomes almost disturbing – but also because of the honesty of the words that he spoke with his head lowered.

Held on Nov 7, the interview had been postponed for three days due to his drama filming schedule. Jang Geun Suk lamented, “I could only sleep for two hours, in the car while traveling back (to Seoul) from Daegu after filming ended. Viewing the current circumstances, it would be great if there were 48 hours a day. The physical time we have now is too limited.”

Time is indeed flowing twice as fast for this guy, whose busy schedule include the promotional activities for “You’re My Pet,” ongoing filming of drama “Love Rain” co-starring Girls’ Generation’s YoonA, and his concert at the Tokyo Dome in Japan at the end of this month.

“To tell the truth, I have a sadistic tendency in me. I don’t let myself off easily. When I say that I want to become more than the ‘Prince of Asia,’ that I want to be the ‘Prince of the World,’ it’s actually to pressure and train myself. I can look at myself very objectively, judge myself cold-heartedly, as I try my best. Although I do envy the freedom that friends of my age enjoy, I don’t regret the life that I have lived till now. This is not because of our different positions in life. It’s just that I’m content with my present life.”

The movie “You’re My Pet” is an anticipated movie, brimming with the charms of Jang Geun Suk. He is the fantasy character In Ho, a “guy-pet” who lives off a capable career woman by singing, dancing, showing much aegyo (cute gestures), and possibly anything else you would want him to do.

“People call this movie ‘Jang Geun Suk’s One-Man Show?’ That’s right. This is a movie which shows everything I can do. However, it is a heavy responsibility carrying a big risk, with the possibility of becoming ‘The Movie that Failed due to Jang Geun Suk’s One-Man Show.’ This is how big the burden is. (Kim) Ha Neul nuna (older female friend) helped a lot in lowering that risk of failure. She brought a lot of realism through her character, thus making the whole premise more believable. I provide the fantasy while nuna provides the human, real-life reactions; that’s how we delivered our roles. She proves again why she is the queen of romantic comedies.”

Regarding the Korean Men’s Association petition to prevent the screening of “You’re My Pet,” he maintained, “I don’t feel a need to comment about this.”

But he continued, “I just want to say two things. Firstly, there’s no need for any comment. Secondly, I feel that it will be hard to survive if one has that kind of mindset. If you become too egoistic and end up being driven out of the house, what’s going to happen to you? My master is going to give me an octopus-shaped sausage if I show aegyo. I’m content with that. I hate being driven out of the house.”

Regarding how much his movie character will be disliked by men, Jang Geun Suk is confident that he will be able to “win them over.”

“Although there are less hate comments compared to the past, I can’t expect 10 out of 10 to like me. What’s more, people will probably dislike me much more. This is not easy at all. But I don’t like to lie to everyone. I don’t like to be pretentious as well. I also want to as truthful to everyone as I am to myself. Even if men dislike me after watching this movie, I’m still going to win them over,” he said with a grin.

“Among all my works, this character seems to resemble me the most. All this while, I’ve been acting as characters with various troubled pasts. I had a strong desire to act as someone who’s always been cheery and happy – that’s exactly what In Ho is. I feel that my usual self is similar to In Ho in ‘You’re My Pet,’ while my working self resembles Hwang Tae Kyung in ‘You’re Beautiful.’”

“You’re My Pet” is adapted from a Japanese manga of the same name by Yayoi Ogawa. Starring Jang Geun Suk and Kim Ha Neul, the movie will open in Korean theaters on Nov 10.

Jang Geun Suk
Kim Ha Neul
Yoo Ah In
You&#039;re My Pet
How does this article make you feel?