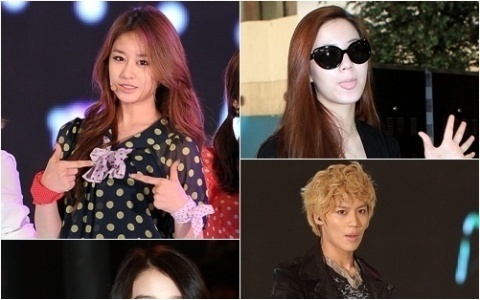 College or No? High School Stars’ Ideas About College

Every year when November comes to a close, high school senior (3rd year in high school) stars debate whether or not they should apply for scheduled or unscheduled admissions to school. The 2012 College Admission Exam will take place in two days, and among the student pool are stars who are opting out of it.

Everyone has a different view on whether or not stars should go to college after high school. Some netizens commented, “It would look better to see them try when they actually can and want to rather than going with the crowd on this matter,” “The attitude towards the mock test is changing, it seems,” and more.

Yoo Seung Ho and IU put off the Mock Test and unscheduled (rolling) admission to school, delaying going to college for a bit. As they are very popular, rumors went around saying that they will be going to college. However the two busy young stars decided they wanted to focus on their careers, Yoo Seung Ho with acting and IU with singing.

T-ara’s Ji Yeon and Five Dolls’ Hyo Young also revealed that they will not be taking the mock test. SHINee’s Tae Min’s final decision was not to take the mock test either. His party has claimed, “Tae Min won’t be taking the College Entrance Exam because we decided that he wasn’t ready to take it.”

Girl group A pink’s Jung Eun Ji, Yoon Bomi, Infinite’s Sung Jong have also decided to continue their music career as opposed to applying for schools. Kang Seung Yoon also proposed his thoughts on it through his company, stating that he will not be applying for school in order to focus on filming “High Kick 3” and preparing to debut.

Admitted through rolling admission — I am a college student-to-be

f(x)’s member Luna and actor Lee Poong Woon were admitted to Joong Ang University through rolling admission. Teen Top’s Chun Ji has applied to a school on rolling admission as well. If he is admitted to that school, he will be a college student without even taking the mock test in the upcoming year of 2012. According to Joong Ang University, Lee Poong Woon and Luna passed the art department audition. However, Lee Poong Woon was not able to audition with Luna for the first audition because he got into an accident the day of. He gave up on auditioning for the first audition but passed the second audition.

High school seniors face different decisions in their lives regarding schools. The new trend or bold decisions, however, are definitely catching the attention of fans and audiences.