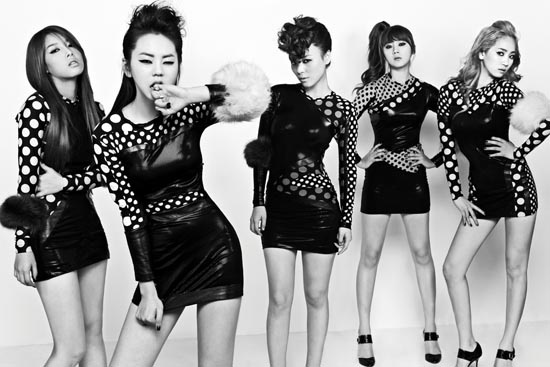 On November 4, the Wonder Girls made an emotional appearance at a press conference to promote their new album at a hotel in Gangnam, Seoul.

After being asked whether she wanted to just enjoy college life like a regular student, group member Yubin, 23, burst into tears.

“I want to continue my studies, but being a singer is the path I’ve chosen,” she said, as tears began to fall. “There’s a lot to learn in this field, too.”

Her words prompted a similar reaction from Yeeun, 22, who was sitting next to Yubin and started to tear up as Yubin was talking.

The outpouring of emotion is possibly indicative of the pressure the group has faced since leaving Korea a year and a half ago to try their luck in the competitive U.S. market.

Yubin (23) continued, “Outside Korea, we were such a stranger and wanderer. Seeing our dedicated fans, I can’t even begin to form words in my mouth because I’m so happy. Even interviewing in Korean makes me so glad,” and started tearing.

The newest member, Hye Lim (19) cried after finishing her sentence, thinking back when she was to replace Sunmi. “I wondered if the replacement is the right thing. I was very sorry for the rest of the members as well.”

One of the reporters asked Sunye (22) if they think their debut in U.S. was a success, she answered, “It’s too early to decide whether or not we succeeded. Especially when on the outside, it seems as though we aren’t doing so well there. But we are learning a lot from these experiences, restarting from the very bottom of the pyramid, working our way up. Even the staff of the drama and other shows says that they can see potential in us and that us becoming famous in the States isn’t such an impossible dream.”

Sohee also agreed, “We’re still young. We have many chances ahead of us. I would not like to give up on U.S. market from how things are right now.”

Following the question regarding their success was whether or not they complained working in U.S. Yoobin answered, “Sometimes it feels good but sometimes it doesn’t feel good. I constantly debate whether or not I want to go back to Korea or I want to stay.”

Then the final question came along—what did your tears mean? Sunye answered, “No pain, no gain.”

Their maturity not only in their popularity but as adults definitely shows through their tears and their words. Although they are coming back, they will be leaving soon after as well, after a month. They will go back in time for the television special, “Wonder Girls at the Apollo” on U.S. cable channel Teen Nick.