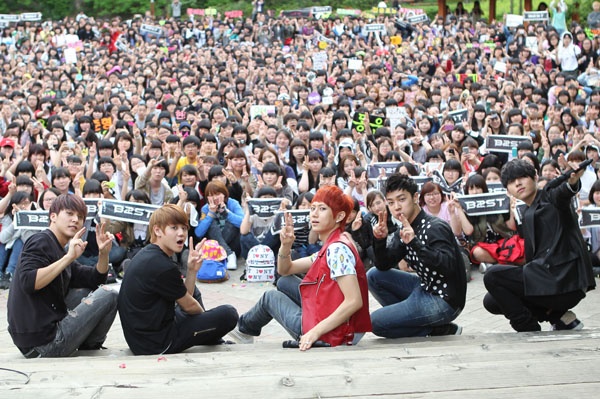 Life of a Celebrity: The Sweat and Tears of Becoming an Idol

Whenever I see an idol appearing in a variety of public events all on the same day, or shooting a video and commercial, going to signing events and then photoshoots, having concerts in other countries or even having practices for 10 hours a day, I wonder if they ever get any sleep? Or at the very least, do they take in the proper meals to keep their body functioning? In this article, we will review the hardships that idols go through in order to succeed (because not everything is pure happiness), and then I’ll talk about the nice part and luxuries of being a celebrity.

When you want to be part of an agency, the first step is the audition. Nowadays, almost all agencies have these little pamphlets inside the CDs you buy, with information about auditions, how to apply or how to get more information about upcoming auditions in Korea, as well as in foreign countries. Some potential idols are fortunate enough to get picked off the street, and the talent scout, aware of the potential that the person must have, offers them the opportunity to show up at the agency and hold an audition.

Then, you go to the agency, get evaluated according to how good you dance, sing or even how good you look. According to these evaluation points, you get accepted or not. Some of them get rejected the first time but they keep trying and their persistence sometimes works as a motive to be part of the agency of their dreams. Once you pass the evaluation process, there it comes the training process which might take years depending on the effort of the chosen person.

[Some of the popular entertainment agencies]

Most idols we see nowadays started training since they were kids, when they were eleven or twelve years old. Once the agency decides the new group, the chosen ones start training right away. Their training consists of vocal lessons, dance lessons, and language lessons which might extend even after their debut. You may wonder how much does it cost to create an idol group? Well, once they get accepted and start their training, it might cost a few million dollars per member. So, can you imagine the amount of money invested in an idol group with nine, thirteen or even twenty-four members? That’s a lot of money (which, let’s say, the idols must pay back after their debut with all their album sales, appearances, and activities they get into).

[Infinite practicing Be Mine]

Once their training is complete, the long-awaited moment finally comes: Their debut. Of course that part of their success depends on how good they are at everything they learned from their years of training. The other part comes from the audience, because the success of an idol group relies on the public. That part gets so hard that sometimes they just want to give up everything, as some of them even consider suicide.

When you train, you do it for 10 hours a day or sometimes even more, and you train in different areas, but once you debut, you job is to promote yourself the most you can. Public appearances, radio shows, variety shows, concerts, commercials, musicals, fan meetings, photoshoots…. so many activities in such a short period of time that you wonder– how do they make that time to do all those activities?.

[Thanks to owner for this pic]

Well, welcome to the life of an idol. When they debut, they barely get any sleep or eat and it happens because their schedule is so hectic that their sleep deprivation is a must. It can be from 24 hours until 33 hours without sleeping, but they have to accomplish with their programmed schedules. Most of them take few naps while having their hair done, while being in restaurants having a meal or even while traveling in their van to the next schedule.

But what happens when you deprive yourself from sleeping?. You get tired. You get sick. And with so many stress and pressure over your shoulders, things like the one from the following video happens. F(x)‘s Krystal fainted while performing at the Lotte Duty Free Shop Family Concert in 2010, due to the anemia condition she has had since she was a kid. But that wasn’t the only fainting incident of her. She also showed up in extremely tired condition after performing on SBS‘ “Kiss and Cry,” when she collapsed onto the ice, breathing heavily, all due to her ill condition and the pressure from the performance.

[Krystal on SBS’ Kiss and Cry]

Being an idol is not just about sleep deprivation, stress, tiredness, pressure, constant practices 24/7 and diets to make your career perfect. It’s also about the accidents that might occur while you perform live. It can be simple accidents like slipping on the floor or losing a shoe on stage but also, there are these kind of accidents that end up wrong and require unexpected hospitalizations. Sometimes some of them have to deal with serious issues of depression or extreme suicidal thoughts or even both.

Some of the accidents and incidents below might not look as serious as the one down below but I honestly believe that when an idol gets hurt while performing live and the issue looks really bad that they need medical attention immediately and they must stop all kinds of activities until they are fully recovered. The following is an accident that involved fireworks. Big Bang‘s Seungri got injured with fireworks because he was standing too close. Good to know that it wasn’t something to worry about but it requiered a medical examination.

I’m pretty sure everybody remembers the accidents involving Super Junior’s members. Actually, as a personal opinion, I believe that Super Junior is the group with most accidents during their entire musical career.

Just to mention a few: first Kyuhyun, Leeteuk, Shindong and Eunhyuk‘s accident when they were coming back from recording Sukira (Super Junior’s Kiss the Radio), then Heechul‘s accident after coming back from Donghae‘s father’s funeral. Then, the small car accidents they had first in Singapore and then in Shanghai after “Super Show 3″ in which Heechul got hit on his face by a fan who wanted to give him a LED board as a “gift.” Then Kyuhyun’s car accident once again back in April of 2011, which wasn’t too serious though.

Then, Yesung, Eunhyuk, Donghae, Sungmin and Leeteuk’s small accidents and injuries they had when they were recording KBS‘ “Dream Team Season 2.” All along 2011, I read like 5 or 6 times that SuJu’s leader Leeteuk has been hospitalized due to 1) a minimal injury on his pinky finger while recording MBC Every1’s “Super Junior’s Foresight” and 2) exhaustation from work overload. And how cannot he be suffering exhaustation with all the shows and schedules he has on his shoulders?. Super Junior’s Foresight, “Hello Baby,” “Star King,” “Strong Heart,” “Dream Team” and the most recent one, “We Got Married.” How can he seriously do it?.

Besides Super Junior and their accidents, it seems that getting hurt is just part of the business.

There have been so many accidents in K-Pop’s history, so many to put them in just one article, that I’ll just talk briefly about some of them. First to recall, most of the stage accidents such as the one with SISTAR, happen because the girls perform with huge killing heals over a slippery floor. Also, because of the constant dance practices and lack of sleep, their muscles tend to wear down. Then because of this, when the situation gets out of control, they get hurt by just dancing, walking or even trying to run away from crazy waves of fans on airports and/or fan meetings.

Back in October of 2010, SHINee‘s Jonghyun hurt his ankle while being at the airport in Indonesia. It required surgery back in January of this year.

Jonghyun’s fellow member Minho also got hurt while filming a variety show and suffered a partial rupture of his right calf muscle, causing him to perform sitting on a chair while promotional performances for their single “Lucifer.” Labelmate BoA, who has suffered a lot of injuries in her career, had the worst ones when she broke her leg in 2006 and then her arm during her Japanese promotions back in 2008.

The most common injuries on idols are always on their legs, arms and cord nodules. Several cases of idols with knee injuries include 2PM‘s Junsu, BEAST‘s Doo Joon, f(x)‘s Amber and ZE:A’s HyungShik, who had both injuries on their ankles (HyungShik fell off from a yacht). And recently, SECRET‘s Hyosung, who hurt her left knee’s cartilage and broke her right foot after she fell down the stairs. Regarding cord nodules we can mention CN Blue‘s Jung Yong Hwa, KARA‘s Park Gyuri, SISTAR’s Hyorin, U-Kiss‘ Soohyun, Big Bang’s Daesung, etc.

Unlike the following cases, MBLAQ‘s Lee Joon, Mir and their leader Seungho have experienced awful sicknesses in their career. First, Lee Joon had some vomiting symptoms before Inkigayo by February of 2011. He was diagnosed with cochlea disorder (which is a chronic disorder disease that affects your inner ear).

Bandmate Mir suffered from an injury on his lower back, had a surgery done also back in February and spent a lot of time resting until he could come back fully recovered. Then, he had an eye injury while being in Peru. Seungho, separately from Mir’s case who couldn’t perform any schedule at all, did record Idol Army back in 2010 with a broken rib. The incident happened while recording Idol Maknae Rebellion.

Some of the accidents are just unavoidable such as sickness, accidents, strange diet rumours (which are just that, rumours) and some other incidents that can be prevented from happening, like extreme depression, thoughts for excessive work overload as it happened to actor Jang Geun Suk, or lastly, suicide incidents, just to mention the latest case of actor Park Yong Ha, who ended up with suicide after struggling with personal and professional issues.

Any person outside the entertainment business who does not have any idea about the constant demand and the price they have to pay for being famous, think they are just machines with an open life to the public and no private life whatsoever. Sad to say, but up to this day, there are still existing “fans” who don’t know how empty they feel sometimes. Yes, being a celebrity can be exciting and awesome but also, when you become famous, you are giving up a lot of things including friends, girlfriends/boyfriends (at least before and after debuting), a private and normal life.

Despite what they all went through their trainee days, there were times in which they couldn’t stand it anymore and wanted to quit. But their hunger for becoming singers/actors and being successful is even more bigger than any obstacle. But in the end, is it really worth to sacrifice your health and mental peace, and your freedom, for popularity?

Let me know what you think!