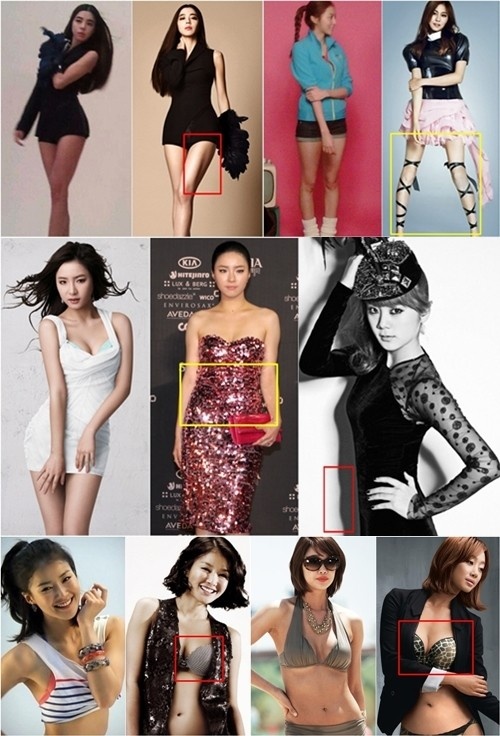 It seems as if female stars cannot live without Photoshop.

Voluminous busts, slim waists, and thin legs were not always natural. They needed “some help” from technology. Photoshop was used to make busts seem bigger and make waists seem skinnier while legs were stretched to make them look longer as well.

Legs:
Kim Gyu Ri’s thighs were cleverly photoshopped; muscle lines were added on the insides of her thighs. Her thighs were smooth and sleek in the untouched picture but have a muscular and firm effect in the retouched version.

Uee showed off her doll-like body on After School’s second Japanese single, “Diva.” Compared to the recently revealed untouched picture, her body is very different; Photoshop was used to create the long, milky legs.

Girl group Secret noticeably had skinnier legs on their Japanese single jacket album. This became such an issue that it went viral in Japan.

Waists:
Shin Se Kyung is well known for being represented as one of the most curvaceous female stars; however, she has a disadvantage as well. Compared to her thin arms and legs, her wider waist appears more prominent. She flaunts her S-line with paper thin waist on photo shoots with the help.

Wonder Girls’ member Hye Lim was not safe from the “game” either. In their recent teaser picture Hye Rim revealed her perfect bodyline with a sexy see-through dress. However netizens quickly figured out that her body was photoshopped from her stomach shadow.

SNSD’s Tiffany was also caught. On a photo shoot picture she shows off her slender waist. The untouched picture portrays the opposite—a wider waist with less dramatic curves.

Busts:
Lee Si Young was caught using excessive Photoshop on a lingerie photoshoot. It was obvious to see that she awkwardly had some help between her busts to give volume.

Choi Yeo Jin also increased volume. She has a perfect, voluptuous body in the retouched picture. But the untouched version was slightly different; Photoshop was used to give “finishing” touches to make her look more glamorous than usual.

Seo Woo became a “bagel girl” (coined term in Korea for baby face + glamorous body) from the help of Photoshop. She also had volume in her bust in a lingerie photo shoot. It was obvious that her body was “upgraded” than usual.

What do you think? Do you think it is okay to use some help for body perfection or should female stars already be confident of their bodies? Let us know!