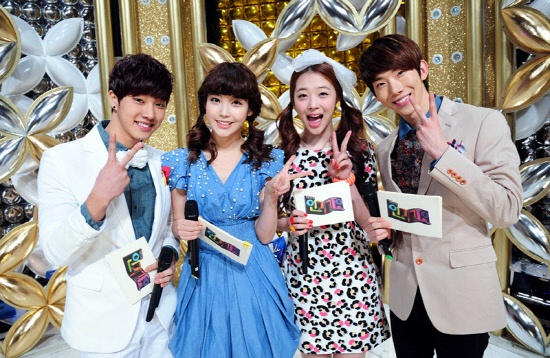 It is reported today by Newsen that Kara’s Goo Hara and Nicole will become the new MC’s for SBS Inkigayo.

Goo Hara and Nicole will be joining IU (who is a current MC of the show) as three female hosts for SBS Inkigayo starting November 20. The weekly music program is going a new direction with three female hosts when music programs usually employ a male-female pair for MC’s. “Inkigayo” currently has two female-male pairs hosting the show.

The producer of Inkigayo stated that the three MC’s will not only host the show weekly, but will also conduct a variety of performances for the viewers.

This week’s Inkigayo will be the last week for three of the four current hosts 2AM’s Jo Kwon, f(x)’s Sulli, and BEAST’s Lee Ki Kwang.

It is sad to see Jo Kwon, Sulli, and Lee Ki Kwang go, but let’s wish the best for our three new hosts.

IU
SBS Inkigayo
How does this article make you feel?