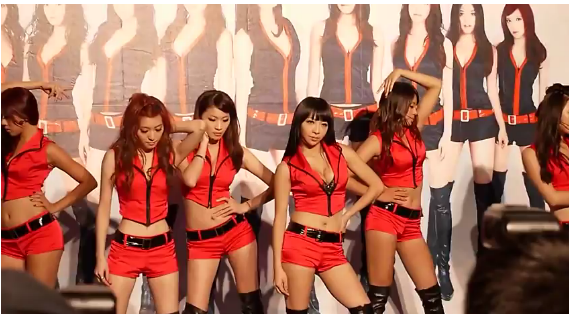 What do you think? SNSD or Super 7? Here’s another controversy they have stirred up yet again.

Called the “Fake SNSD” by many fans, Super 7 had an interview where they claimed that they called SNSD “fake beauty.” Local media quoted Super 7 as saying, “Each SNSD member is good at either dancing, singing, or variety shows, but other than that they all look ordinary. It’s not like they’re particularly pretty or anything. They’re just plastic beauties. As opposed to SNSD, however, us Super 7, we have at least a C-cup size with sexy bodylines and are natural beauties.”

Super 7’s previous controversy regarding the clothes, moves, and songs has yet to fade completely and they brought up another source for antis. Regarding the controversy from last month, they said, “We all cried. But I believe criticism is another form of attention.”

But later on, as the interview went on, Super 7 seemed to realize they went a bit too far and took a step back, saying, “We can’t possibly become better than SNSD, but we do consider them as our idols.”

This is a good publicity stunt, if that’s what Super 7 is going for, but certainly not a good tactic considering SNSD’s massive popularity around the world. We’ll have to see how this whole thing pans out, but so far, all things seem to be heading in the wrong direction.

controversy
Plastic surgery
How does this article make you feel?