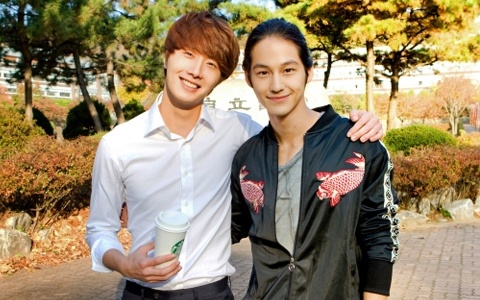 Jung Il Woo owes the original “High Kick” series (“The Unstoppable High Kick“) for shooting him to overnight stardom in 2007, and he cameo’d in the sequel series in 2009. Now he’s heading back to the franchise for a cameo in “High Kick 3: Counterattack of the Short Legs,” starring as himself.

Well, kind of but not really. He plays a senior in high school named Il Woo, but I suppose that’s the only similarity to his real self. I’m a little bummed that he isn’t reprising his original character, frankly, because it would be hilarious to see alpha-rebels Yun Ho and Jong Seok in the same classroom trying to out-brood each other, no?

(Also: It would’ve given his best buddy Kim Bum an excuse to join him in the cameo, if they both played their “High Kick 1” characters — which is doubly hilarious because those two characters didn’t really like each other much. Oh, all the things that could have been!)

Like the teenaged Yun Ho harbored a one-sided love for a teacher in the original series, his character in this cameo also falls for an older woman. But this time the age gap is just a wee bit bigger — it’s Yoo Sun whom he falls for at first sight. Ha. Apparently they go on a date and Yoo Sun wears a uniform, the reason for which has yet to be disclosed, which leads me to wonder: How is it that (more or less) happily married Yoo Sun is getting all these dates? First the effete musician man, and now the hot high schooler? Mom’s workin’ some mojo.

Jung Il Woo’s storyline will be featured in the show’s 40th episode, which airs next Monday, November 21.

High Kick: Counterattack of the Short Legs
High Kick through the Roof
Jung Il Woo
How does this article make you feel?