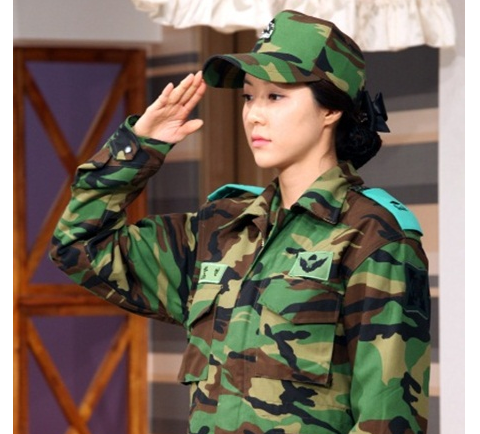 Actress Park Han Byul has grabbed the boys’ attention again- not with her feminine beauty though. The actress has put on military clothes for her upcoming role. She looks good even in an army uniform!

For her upcoming role in MBN‘s weekend sitcom “Increasingly Confident”, she will play the character of the same name (but with a different last name), who is an out of the ordinary character because of her army lifestyle.

On November 17, pictures from the set of “Increasingly Confident” were posted on the internet, revealing a picture of Park Han Byul saluting in an army uniform, along with two other pictures. They have attracted the public, who is now high anticipating this new sitcom.

On November 16, Park Han Byul, Park Hae Mi, Lee Jae Yong, and Kang Ji Sub were present for filming in Kyung Gi Do. Because Han Byul’s on-screen mother is a colonel, and her father is a lieutenant colonel, it is natural that their daughter is involved in the army lifestyle as well.

On her first sitcom project, the actress said, “Since it’s not everyday that I get to see the army uniform and the helmet, I find this all really fascinating. This army world, which is so new to me, is a really fun experience.”

She added, “I’ve never had this kind of role before, so living as Lee Han Byul day by day is a nervous yet exciting experience.”

With Park Han Byul’s chirpy personality, the filming set was always a place of smiles and laughter. She said, “Before we started filming, the rehearsal was comfortable and I hope that we can continue to go like this. The audience may not know the real army life but by watching the show, they will have a great time by just relaxing. I hope to share this with future viewers.”

Girl power for the win!