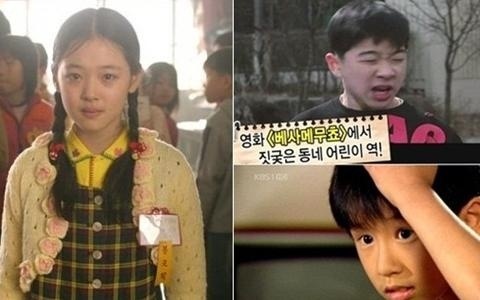 Idols and Actors/Actresses with a Child-Acting Background

Did you know that F.T. Island‘s Lee Hong Ki started his career as a celebrity through acting in a children’s drama series “Magic Kid Masoori?” Not only him, but also many other idol singers and actors had started out their career as a child acting sensation. Check out a few notable examples.

Can you guess who’s who?

F.T. Island’s Lee Hong Ki: He acted as a character in a children’s drama KBS 1TV’s “Magic Kid Masuri.” The show is about magicians that secretly lived in Korea, to save the world from evil mages. This series became super popular that they started selling identical necklaces to those in the drama! I recall this show first airing when I was in elementary, and any sane school child would have watched every single episode to Magic Kid Masuri. Some of my friends even went to collect the necklaces and action figures! Lee Hongki played a character named “Jihoon.” His passionate acting, cutely crooked teeth, and tanned skin was especially noticeable!

This children’s drama might seem overly cheesy, but it actually teaches children how to form a conscientious sense and morals…!

Yoo Seung Ho: Who doesn’t love this adorably sexy oxymoron? Yoo Seung Ho starred in “Magic Warriors Mir and Gaon,” a sequel series from the mega-sensational “Magic Kid Masuri.” They created this series because Magic Kid Masoori was indescribably popular among elementary students! He played the character Mir, with magic world age of 138 and human age of 12. The 2 other characters were played by Lee Minho and Choi Jiyeon. Guess which one Yoo Seung Ho is! Scroll down to find out!

Yes.. he was the adorable one in orange.

f(x)’s Sulli: She Starred in “Drama City – There is a Demon,” with the same beauty and same cutesy acting. She also acted as Ha Ji Won’s younger self in the 2008 movie “Babo.” She was in sixth grade at the time but she surprised everybody with her tearful acting. Her line was, “I’m telling you to disappear from my sight. Get away from me!” She also starred as a child actress in “Seo Dong Yo” and “Punch Lady.”

Big Bang’s Taeyang: He acted as a mischievous kid in the movie “Besame Mucho.” He looks so mischievously adorable!

KARA’s Gyuri : Gyuri was on a corner named “Sonagi” from MBC’s “Today’s a Good Day.” “Sonagi” was comedian Kang Hodong’s debut work. Gyuri was 7 years old at that time, and acted as Hodong’s little brother Podong’s girlfriend. She received a lot of attention for being irresistibly cute at that time.

Sulli on the top, and Gyuri at the bottom in the blue!

KARA‘s Seungyeon : She starred on a drama series named “Star on My Chest.”

Boyfriend’s No Min Woo—not the hot evil doctor one from TRAX! : No Min Woo also acted in “There is a Demon” with Sulli as her classmate. He was also super adorable!

T-ara‘s Eunjung: You can never leave out Eunjung when it comes to idols in action! In KBS 1TV “Adults Don’t Know,” “Little Women,” “To-ji,” the movie “Madeline,” and “Quiet World,” she flaunted her talented acting skills. From the multiple dramas and movies, the drama “To-ji” and 2006 movie “Dating in Earth” have been the most popular ones she appeared in. In “To-ji,” she gave off a innocent and pure aura as a young country girl. However, a couple of years later in “Dating in Earth,” she had a more feminine look as a high school student with long straight hair.

Lee Hyun Woo : Known for his manhwa-prince-like looks, he debuted his acting career in a very popular children’s drama “Oola Boola Blue Jjang” with a small role. I absolutely LOVED watching “Oola Boola Blue Jjang”! (I never missed an episode.. Oh, the glorious childhood memories!) It was about a young girl who was a princess of planet “Blue”, along with some villains, of course, that were after her treasure and her planet. That small role set the career of his path, seeing that he has been acting consistently, and starred in a popular drama named “God of Study.” Recently, he began to take part in a currently popular drama named “Gyebaek.” Check out his recent photoshoot with Elle Girl!

Do you know any more idols and actors/actresses with childhood acting histories? Please leave us comments below!