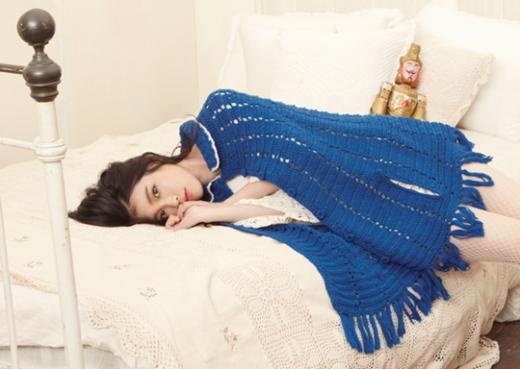 A brand new image of IU’s soon to be released album has been revealed. Loen Entertainment had previously revealed the first teaser image a week from now.

In this picture is IU, lying down on a bed in a bright room bathed in sunlight,wearing a blue knit cape,and very eye-catching white fishnet stockings.

The overall image gives off a classic,traditional yet vibrant feel accentuated by the contrast of the blue cape wore by IU and the whiteness of the room and the rest of the image.

This concept image shows off the same refreshing sensibility and light atmosphere from IU’s previous releases and concepts. Similar to finding a music box in your grandparents’ attic, IU’s new release will be full of surprises as stated by Loen Entertainment’s representative:

“IU’s coming back with a new,more mature image and more touching music. Through this album,fans will
be able to appreciate and witness IU’s evolution and various emotions as she heads into her 20s. Please anticipate it.”

IU
Last Fantasy
How does this article make you feel?