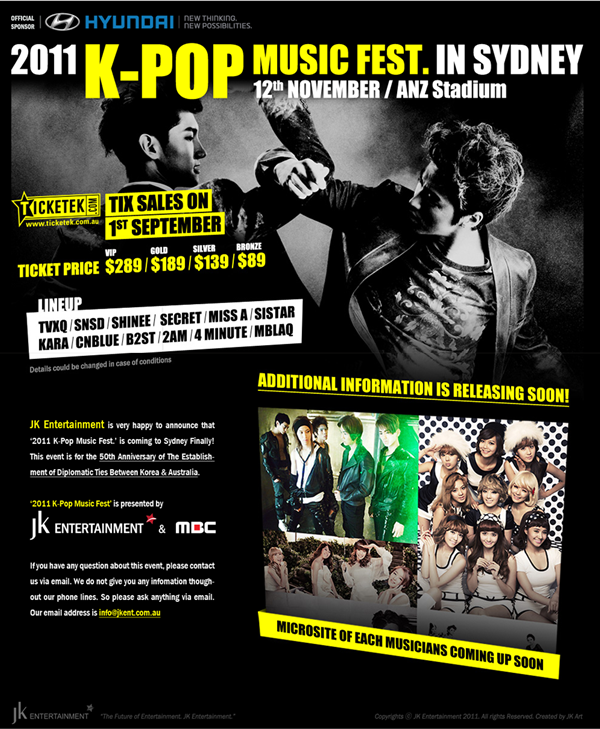 November 12, 2011 will not be a day forgotten by K-Pop fans in Australia (Sydney residents in particular). When rumors first spread of such an event taking place, many, and even myself, could not believe the news. When the news was actually confirmed by JK Entertainment, I was astounded. There were two things that were going around my head:

Twelve of the top idol groups in Korea were invited to the event: TVXQ, SNSD, SHINee, SISTAR, Secret, Miss A, MBLAQ, KARA, CN BLUE, B2ST, 4 MINUTE and 2AM.

Mike (happy go lucky) and I were assigned to attend the event by Soompi. We were issued two media passes and tickets for the actual concert.

The press conference was held on level 4 of ANZ Stadium, where the concert was held.

After waiting for a few minutes, there was an announcement that the conference was to be delayed by approximately 15 minutes. This was a let down for us as we wanted to see our biases ASAP!

When the conference commenced, the first group that was announced was Miss A, and they walked into the room as everyone snapped their cameras

As various other groups shuffled in, it was apparent that celebrities like these really looked a lot more elegant in person than what you see on TV. One group by one, the idols entered until all members were seated.

After each group introduced themselves, a few questions were asked to various individuals in regards to how they felt about coming to the country. When the MC asked, ‘When I say Australia, what is the first thing you think of?’ I was afraid someone would say ‘Drop bears!’ but luckily Tiffany of SNSD pensively replied with a smile, ‘I think of the outback and the stars that are so amazingly beautiful at night.’

After the planned questions were asked and answered, it was time for a photo session. Mike and I were absolutely oblivious as to what exactly was going to take place at the conference, so this certainly caught us by surprise! We jumped off our seats, grabbed our cameras, and flashed away.

After the photo session, the event concluded and straight away, we headed for the concert.

More photos from the press conference:

[Stay tuned for Part Two: Concert Coverage, to be posted in a few days]

SHINee
TVXQ
2AM
KARA
MBLAQ
miss A
Secret
SISTAR
How does this article make you feel?