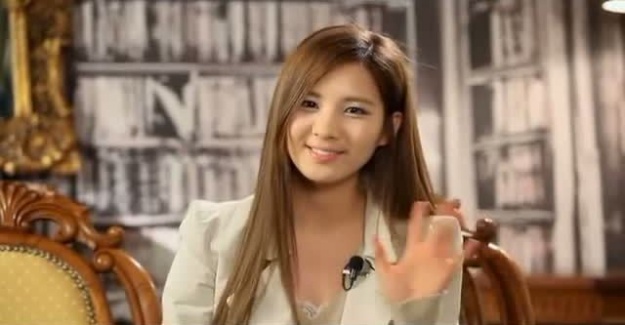 [Recap] SNSD’s Seohyun on "MTV Playlist": The Girl Is Now a Lady

SNSD’s youngest member Seohyun, now a mature young lady, shared her thoughts and song recommendations on SBS-MTV’s “Playlist.” Along with her choice music videos, she opened up on her journey so far with SNSD, being a college student and her thoughts on life in general.

“I pay attention to the melody more,” Seohyun said as an introduction to her song recommendations. “Although I look at the lyrics, too, I go by the feel of the melody.”

On her experience in Europe:

“Europe was quite an experience. When ‘Gee’ came out, it became very popular that everyone in Korea knew the song. When we went to perform in Paris, I only expected that Koreans living there would come to see us. But people in Paris also came. Lots of them, too. They were singing along with us, and singing the lyrics in Korean.”

On her favorite artist:

“During our Japan Arena Tour, I performed a song, ‘Stuff Like That There,’ which is a song by American Idol (winner) Kelly Clarkson. That song is very special because for that performance, I prepared to tap dance and performed that way.”

“My favorite artist is Kelly Clarkson. This song ‘Breakaway’ is lately my most-played song. Because we have a lot of scheduled activities and I feel that I have no time, the song gives me strength and is very encouraging.”

On becoming a singer:

“I began training when I was in fifth grade of elementary school. I wasn’t yet very aware of the popular songs at that time so I ended up singing a children’s song at my audition. When I think back on it now, I wonder how I became a singer.

“When I decided to become a singer, I looked through the memorable performers that I remember from my childhood. BoA stood out in my mind as a powerful dancer and charismatic performer. I personally like this ‘No. 1’ song of hers.”

On her singing career:

“I’ve not believed that I sing well at all. When I play this song, I’m reminded of myself—the passion that I have for chasing my dreams. It brings me back to that first intention.”

On being in the public eye and being a student:

“With ‘The Boys,’ I really became aware that a lot of people are watching us closely. So the other members and I monitor ourselves and we remind each other to correct our mistakes. We look out for each other not to flub up since a lot of people have eyes on us.”

“I try to make time to go to school. On those days, I just put on BB cream since onstage I wear a lot of makeup. I put on BB cream and normal clothes, and just like that, I go to school. I also want to be treated like a normal college student. But they recognize me and it seems people want to see SNSD all the time (she means everyone prefers to see her all dressed up and made-up when out in public.) In school, though, they don’t really treat me any special. My sisters (other members)…They treat them a little special.”

“While preparing for ‘The Boys’ release, I played this a lot. Because it isn’t like our usual, I studied it. I had a lot of thoughts about the image. It’s because I need to do that to perform the song well. Truth be told, we’ve shot a few music videos and they usually take two days. But for this, we used up one week of shooting time. There’s this scene where a pigeon is let loose. Jessica was setting it free to fly, but it went to the floor instead. It’s because the pigeon suffered for a long time.”

On romance and love, at 21 years old:

“Of course, since Jung Yong Hwa and I were on ‘We Got Married’ for a year together, we’ve gotten close. People like how we were on the show so there’s a lot of curiosity. ‘Are they also like that in real life?’ Especially…lately, we have a lot of international fans who like us. I was very surprised at that. Actually…this time we were just in Beijing. There, a lot of fans held in their hands Yongseo fanboards. I was really surprised. The program is not broadcast in China, how come a lot of fans like us? It must be because of the Internet. They found out about us and came to like us.

“There’s this song called ‘Love Girl.’ It’s very bright and cheerful. I really like this song.”

Song #7 “All That Jazz” from the musical “Chicago”

On musicals and ambitions:

“I’d like to pick a musical. I’m thinking when I’ve gained more skills, I would like to perform in a musical. I really like Ock Joo Hyun’s musical. I went to see it and came back really touched. A musical encompasses a person’s life so there are a lot of lessons to be learned. It can widen horizons. I have this thought of being onstage to touch people. Every time I watch a musical, it becomes a different experience, so there will come out of it brand new ideas.”

“I’ve shared with you seven songs that I like. I don’t know if you’ll all like them as well. But I hope when you find difficult times, you’ll have these songs to play. I hope these SNSD songs will bring everyone strength. We are currently promoting ‘The Boys’ and I hope everyone will like it. We will continue to work hard to come out with better music so we may repay everyone’s love and support. Everyone please take care and stay healthy. Thank you.”

Seohyun also briefly talked about what to expect of her and SNSD in the near future. Currently, they’re in the thick of promoting their third full album, “The Boys,” and will continue in these activities until the end of the year and some of the coming one. “The Boys” has also been released in the US. Seohyun and the rest of SNSD will likewise still be active in the “SMTown Live” concerts.

“MTV Playlist” is a new weekly program on SBS-MTV that features an artist’s music video recommendations, along with a short interview and a glimpse of his or her activities. Soompi will endeavor to cover this program with recap articles as often as possible.

BoA
Jung Yong Hwa
Love girl
MTV Playlist
No.1
Seohyun
The Boys
We Got Married
How does this article make you feel?