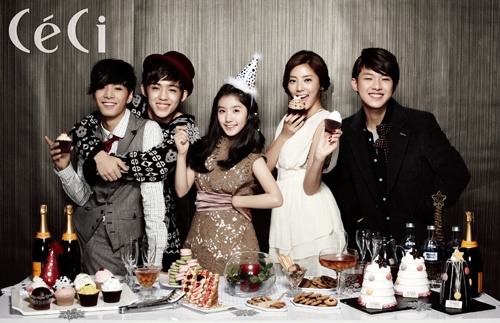 After teasing us with a Pledis Entertainment group photo, Pledis Boys has finally unveiled close-up shots through a recent photo shoot for CeCi Magazine. Often called the “After School Boys,” Pledis Boys joined the photo spread with Son Dam Bi and After School members. The photo spread is called “Oh! Party Tonight” and has the boys dressed in suits and leather jackets.

Netizens who saw the photos mentioned, “I became their fans right away after see the photos, “When do they debut? I want to see them perform asap,” and “I’m already excited.”

Despite not making an official debut yet, Pledis Boys are already quite popular as their fan club has been created recently. In particular, Jang Do Yoon, who’s being called the “Second Jung Yong Hwa” after appearing on KBS “Incredible Audition,” and Jong Hyun, who’s made a brief appearance on KBS “Ahn Nyung Ha Sae Yo,” are garnering the most attention.

The full photo spread will be released in the December issue of CeCi Magazine. You can find more pictures at their website here!

After School
Pledis Boys
How does this article make you feel?