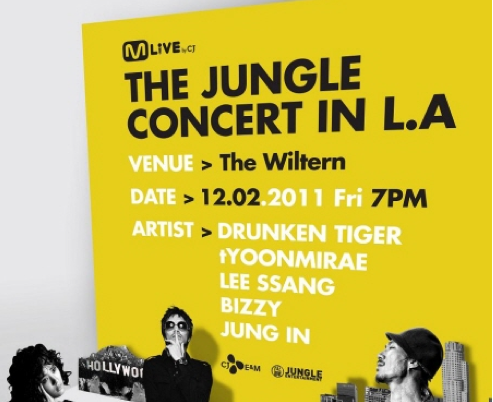 Drunken Tiger, Yoon Mirae, Leesang and More to Raise the Roof with Hip-hop Concert in L.A.

Good news, hip-hop fans! South Korea’s representative hip-hop artists, Drunken Tiger, and Tasha will be holding a concert titled, “M- Live by CJ: The Jungle Concert in LA,” in Los Angeles, California, on December 2. The concert will be held at The Wiltern.

It will be the first Korean hip-hop concert held in the United States. The concert will feature Jungle Entertainment artists Drunken Tiger (Tiger JK), Yoon Mirae (Tasha), Leesang, Bizzy, and Jung In.

The concert is part of the M-Live Concert series that is hosted by CJ E&M. For tickets, go to Powerhouse or Live Nation. You can get more information at the concert’s official Facebook page.

Jungle Entertainment expressed their enthusiasm for the spread of Korean hip-hop with, “With K-Pop expanding globally, Korean hip-hop will begin to find footing in the middle of the global Hallyu Wave.”

Here is also a teaser for the concert. Looks exciting!

Jungle Entertainment
How does this article make you feel?