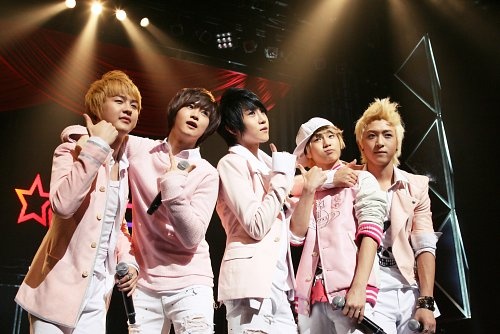 On November 26, Open World Entertainment, the label that houses Jun Jin, The Boss, and X-5, lent their support to the growing K-Pop wave by holding a family concert in Japan called the “Open World Festival In Tokyo.”

Held at the Odaiba Dipa Ariake Concert Hall, the family concert included exciting performances by Jun Jin, who recently completed his military service, and his junior labelmates, The Boss and X-5.

The Boss were the first up at the concert, who showed off their fluent Japanese skills by greeting their fans, “It’s so nice to see everyone here.” The boys performed “Tokyo Boy,” “Lady,” “Calling You,” “New Boys,” and “Lady,” before passing on the baton to Open World’s latest rookie group, X-5.

X-5 began their own segment with “Fantasy” before going on to say, “The atmosphere in here is amazing. It’s an honor to be able to perform at such an amazing stage, but more than anything, we’re both glad and nervous to be performing alongside our seniors, The Boss and Jun Jin.”

The boys also received a round of applause when they showed two new songs from their upcoming December release, which were received ecstatically by their Japanese fans.

Jun Jin was in charge of the finale, but that didn’t mean the crowd died down. As it was his first official stage since his discharge on November 14, fans welcomed him back with open arms. After performing “Hey Ya,” he said, “It’s been a while since I’ve seen everyone. I think people are most curious about Shinhwa news. Next year, everyone will be discharged from the army so we are planning to promote together. Please look forward to that.”

The exciting concert finally came to an end with the boys personally shaking hands with each of the fans as they left to thank them for coming all the way to attend.

Jun Jin will be beginning his Asia tour fan meet starting in China on December 3 while The Boss is slated to release their fourth Japanese single on February 7. X-5 is also preparing for their official comeback with a new album in December. There’s definitely plenty to look forward to for Open World fans!

Jun Jin
Open World Entertainment
The Boss
X-5
How does this article make you feel?