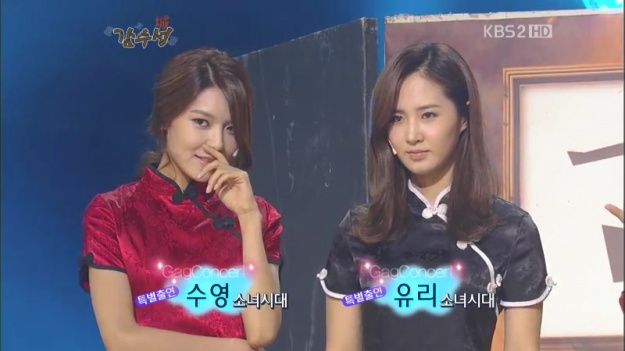 SNSD’s Yuri and Sooyoung made cameo appearances in the November 27 episode of KBS “Gag Concert.” In the segment called “Sensitivity,” the two SNSD members played the roles of abducted princesses, giving plenty of laughter to the surprised audience.

Yuri made her first line, “I came here to find my old boyfriend who had promised to marry me seven years ago.” She then went on to slap the eunuch standing next to the king, screaming, “You bad boy!”

And then, one of the generals told the king, the two princesses were good at martial arts. The king said if Yuri and Sooyoung could teach his generals martial arts moves, he would save their lives. Sooyoung came up to the stage and said it’s called the “Fist pumping martial arts.” As she showed some of the moves, “Run Devil Run” started playing in the background and she started mixing some of the actual choreography from the song.

Yuri came up next with a move called, “arrow shooting,” which was immediately followed by “Hoot” playing in the back ground. Finally, Sooyoung joined Yuri for a move called, “Chook Ji Bub,” or the “magic method of contracting space.” The song that played this time was “Gee,” as the entire cast danced to the song on stage.

At the end, the king said if they could make him happy, he would set them free. Sooyoung and Yuri again turned on their charms with cute voices and moves, melting the hearts of many fans watching the show.

Gag Concert
Sooyoung
Yuri
How does this article make you feel?