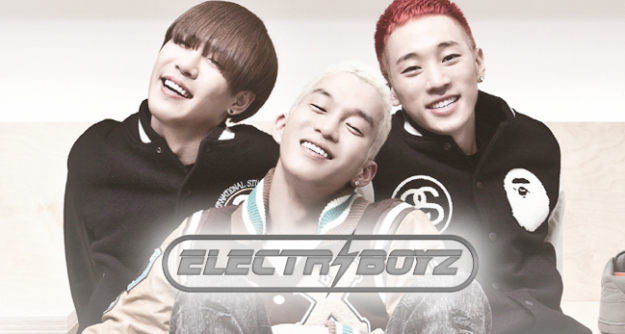 Electroboyz Take a Picture with Brian McKnight after Mini-Concert

Recently, hip hop trio Electroboyz were lucky enough to perform with world-renowned R&B musician Brian McKnight at a club, and even shot a group picture together with the big star.

On November 27, the group wrote on their official site, “A photo after meeting Brian McKnight at the Phantom Concert.” In the picture attached, the three members can be see posing chicly next to the R&B legend, who was holding onto Electroboyz’ latest single, “Ma Boy 2.”

Netizens who saw the photo replied with, “You got to meet with a worldwide musician,” “The unstoppable force of Brian McKnight,” and “Rapping beasts meet an R&B star?!”

On November 26, Brian McKnight visited Korea to perform a concert for his latest album release, “Just Me.” After his concert, he headed over to “Club Phantom” in Gangnam where he performed a special joint stage with Electroboyz.

Electroboyz is a hip hop group produced by the famous Brave Brothers and are labelmates with the Brave Girls. The trio recently unleashed their latest single, “Ma Boy 2” featuring SISTAR‘s Hyorin. The song is a special remake of SISTAR19‘s “Ma Boy” and was produced by none other than Brave Brothers.

Brian McKnight
ElectroBoyz
How does this article make you feel?