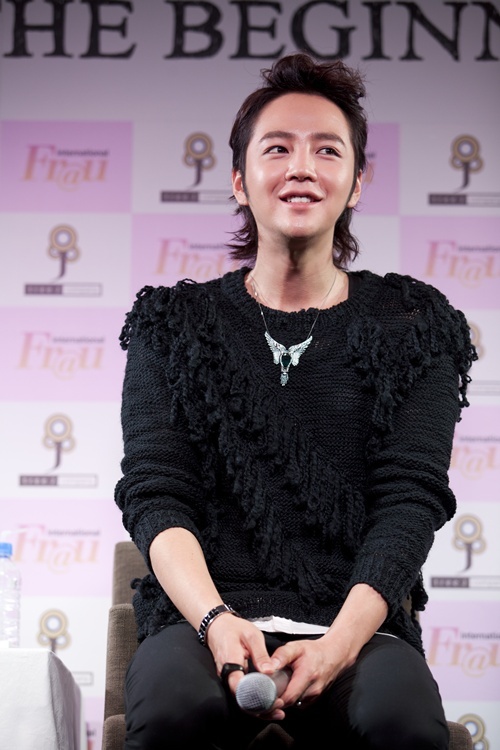 Jang Geun Suk Performs for 45,000 at the Tokyo Dome

Jang Geun Suk‘s known for toting himself as “Asia’s Prince,” but he became just that at his “2011 The CRI Show In Toky Dome” on November 26!

Held at the legendary Tokyo Dome, the star managed to sell out over 45,000 seats for his Japanese fan meet concert. He held his first fan meet in 2008 and was barely able to fill 2,000 seats then, so this feat in just under three years comes as an astounding accomplishment. The Tokyo Dome is regarded as a concert hall that only the best of the best can perform in.

Jang Geun Suk made his emergence in a blonde wig and spared no time in introducing himself as a prince. His stage was like a dream made into reality, a realization of everything he’s worked to accomplish.

“I’m holding my very own concert at the Tokyo Dome three years after holding my very first fan meet in Japan in 2008. I’ve always loved Japanese modern rock since I was little and it’s been my dream since middle school to perform at the Tokyo Dome. It feels invigorating to have finally made it,” the actor explained in his interview at the Ginza K Place.

The name of his concert, CRI (“critical)” and “The Beginning” all stand for a new beginning as he reaches the 20 year milestone in his career. He invested $4.8 million USD and brought in two 20m cranes to be able to reach his fans watching from the third floor.

“The point of my concert is to show my dream of becoming a prince and the castle I wish to live in, and the actualization of that dream. I planned a show that I could enjoy with all of my fans. I have a bit of a sadist personality, where I find joy in messing with others… (laughter). I don’t think Japan has seen such a character yet. As long as it doesn’t interfere with others, I just want to have fun and be honest. Being forced to do something I don’t want to do doesn’t sit well with me.”

Continuing, he added, “I only have songs that I personally sang in the line-up because as an artist, I think it’s important to sing your own songs.” On his personal life, he revealed, “The two days a week that I go to school I consider my rest period. It’s hard to distribute my time, but I plan to just concentrate on my drama or concerts and rest where I can. I get IV drips about once a week to have my health keep up.”

As for the future, he has his 20th debut anniversary coming up, and he plans to hold a domestic dinner show tour. “I have Ryu Shi Won hyung to call or run to when I’m going through a hard time. There’s this strong friendship between Hallyu seniors. As for me, I’m not enjoying my position as a Hallyu star, but rather just my life. I hate being content or safe, and my dream is to become Asia’s prince, and later, a world prince. I’m just in the process of spreading out into the world.”

Jang Geun Suk
Tokyo Dome
How does this article make you feel?