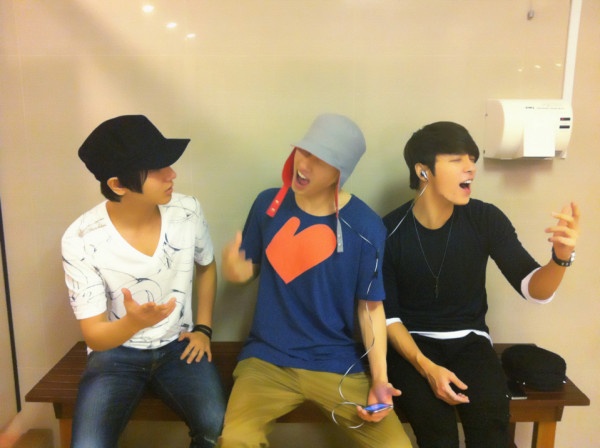 Here we go through some of the top twitter/me2day posts of the day! Please let us know if we missed anything! Be sure to follow us on Twitter @soompi for the most up-to-date K-Pop news on the Web!

“First M-ST’s jacket photo in a long time!” – BEAST’s Yoon Doo Joon posted a photo of BEAST and MBLAQ together (hence, “M-ST”). MBLAQ and BEAST debuted on October 15 and 16, 2009, respectively, and have often shown close friendship through photos together.

“Ever since I became a college student… this semester was the worst. If I had known it would be like this, I should have just gone on a trip to save my tuition. I just wanted to get through it even if it was tough, but I can’t take it anymore. I don’t want to do anything now. A comma, all I need right now is a comma…” – Park Shin Hye posted this message lamenting her busy schedule this past year. It almost sounds like a desperate plea for some rest, but we hope it’s nothing serious!

“Beautiful Singapore, and the just-arrrived-me. It feels so refreshing after taking a nap on flight.” – Yoon Eun Hye posted a photo that looks to be taken at her hotel. Netizens have been particularly impressed by her “porcelain skin,” despite having no makeup.

“This is Singapore… for a better performance in two days, teaching the two younger brothers how to sing.” – Super Junior’s Yesung with fellow members Eunhyuk and Donghae. Super Junior is in Singapore for the 2011 MAMA Awards. Fans are loving their playful expressions!

“Oh~no~let’s not take photos secretly.” – Lee Hyori shared a picture of her secretly taking a photo of a dog. Some netizens think it’s her secret message to Korean media that revealed her relationship with Lee Sang Soon earlier today. Either way, we’re happy for her!