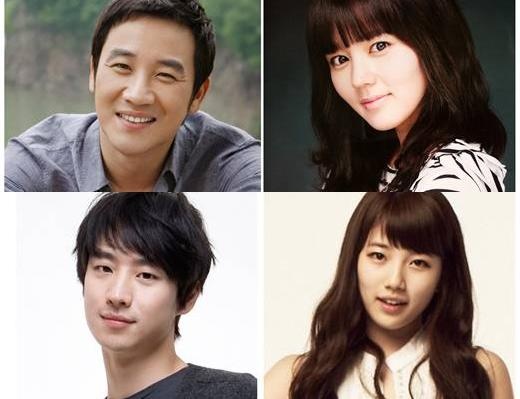 “Introduction to Architecture” is about an architect named Seung Min (played by Uhm Tae Woong) who is visited by his first love during his college years, Seo Yeon (played by Han Ga In). The story starts with Seo Yeon asking Seung Min to design her old house for her.

Uhm Tae Woong and Han Ga In act as lovers in the present time while Lee Jae Hoon and Suzy plays their younger, twenties love.

In the revealed still cuts, you can see Seung Min’s uneasy face expression due to his returned first love, Seo Yeon. On the other hand, Seo Yeon is deeply looking into Seung Min’s face. In the other still picture, you can see the sweet but tense air surrounding the younger actors, as Suzy and Lee Jae Hoon portray the nervousness of a first love.

Also, the strangely similar appearances and ambiances between Han Ga In and Suzy are especially increasing attention.

Filming for “Introduction to Architecture” started last month on October 25 and it is said that about 40% of the movie is complete so far. Stay tuned on Soompi for more news about this film!

Suzy
Han Ga In
Introduction to Architecture
Uhm Tae Woong
How does this article make you feel?