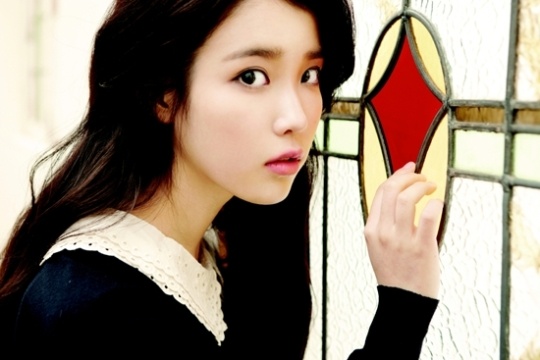 The cute 15 year old that debuted back in 2008 has now grown to become one of the most loved singers of our generation. Behind her cute looks are talented vocal skills unlike any other, and just four years into her debut, she now stands at the top of the industry with still infinite potential left ahead of her career.

The year 2011 was one that skyrocketed her to fame, creating a sort of “IU syndrome” amongst new fans just now discovering the hidden gem of her talents. “I ran without rest all year long, but it was definitely a year that was the most fun for me,” she said with a big smile as she sat down for her first comeback interview.

She’s now standing at the final threads of her teenage years, which is why she titled her new album “Last Fantasy.” She regards the album as sort of a diary of her youth, a record of all of her thoughts and emotions as she begins the transition into becoming a woman.

“I really don’t feel anything in particular, as I feel that this was just the natural path to take. As time passes, I believe my image will change with it accordingly. I don’t think I’m quite ready to become an adult yet, though.”

The album’s 13 tracks are the beloved works of 12 amazing composers. The 13th song itself is one self-composed by IU herself. As a final present for IU before she begins her journey on adulthood, her company went ahead and provided her with a sweet surprise in the form of a featuring by her idol, Corinne Bailey Rae.

“This album contains songs I composed and helped compose. I love writing.. but more than anything, I’m glad to be able to show my musical growth. I watched over the mixing and mastering and tried to set a standard for myself in the recording process. I feel that I’ve gotten closer to the true gaze of a composer, and I’m grateful that I had people around me to help bring out the voice that I wanted.”

IU described her title track, “You and I,” as, “The song has a big spectrum in that the chords go in and out of major and minor sounds. After you listen to it, you’re left in a stupor because you’re not quite sure whether what you listened to was a bright, happy song, or something sorrowful.”

Touching on her more personal decision to forgo college for her musical career, IU truthfully confessed, “I honestly gave up on the prospect of applying for college because I’m not good at studying and I don’t have the confidence to. Netizens praised my decision, which I thought was a bit out of the ordinary. I actually think that the other singers pursuing their education on top of their careers are more worthy of respect.”

On whether or not she considered herself an idol, she commented, “I often see people ask questions online of whether they’d categorize me as an idol or a singer. Teens viewed me as an idol while the older generation didn’t. I’m actually confused about that myself, but I think it’s good in that I’m able to fit in either side.”

When asked how she pictured herself in 10 years, she replied, “I might not be a singer. While producing this album, I thought to myself that I would like to pursue other careers, not just singing. I’m still singing so I think I have the time to find something that I’m also good at. That might be a career related to music or not. I’m also the suspicious, cautious type, so no matter what happy events fall on me, I always doubt myself and remind myself that it’s not completely mine. I’m not able to fully enjoy something because of that. Although “Good Day” earned unbelievable popularity, I reminded myself that that popularity could very well disappear one day. That’s why I thought that even if I gave up being a singer, it won’t be that hard for me because of the popularity.”

Continuing, she concluded, “Ultimately, I think I’ll become a composer instead of a singer. Or maybe something I would have never even thought of? In about five years, I want to be in a band, and for that to happen, I have to learn a lot of instruments.”

IU is currently preparing for her Japanese advancement next year, and has studied the language enough to be able to hold a light conversation. “Learning the language is something I consider highly important because it’s through the lyrics that the emotions of a song are delivered. I want to be able to move the hearts of my Japanese fans through my singing. I don’t actually have a goal on winning first place or anything; I just want to be able to meet Shena Ringo.”

IU
Last Fantasy
You and I
How does this article make you feel?