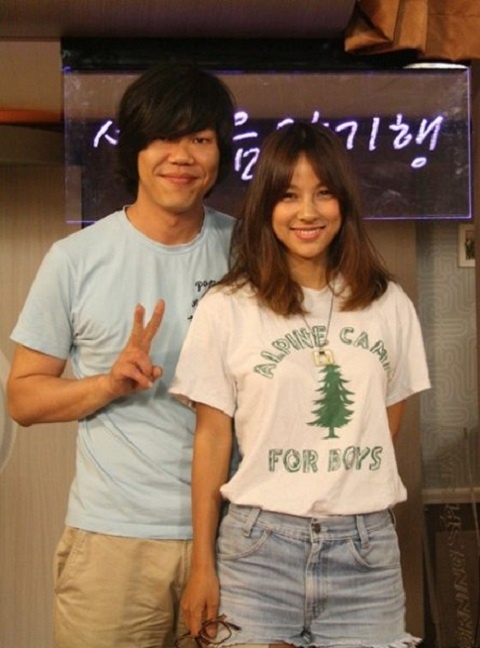 So… the big news yesterday was that sexy Lee Hyori and Rollercoaster guitarist Lee Sang Soon were in a relationship, but not exactly “lovers.” (What does that mean?!?!?!)

The two started to have feelings that are stronger than friendship (Cue Marvin Gaye’s “Let’s Get It On“) while working on the song “Remember” in July. The song itself was made to help out abandoned animals. They are officially dating and the relationship has been going on for about 4-5 months. The two are being careful about their relationship because of all their age, marital pressure, and probably because they are celebrities.

In lieu of all this news, much like a bad dose of hind sight bias, Korean Netizens are bringing the spotlight to past pictures, exes, and foreshadows to the relationship (?).

On November 19, Lee Hyori wrote on her twitter, “Heung! Chee! Bboong!” and post a picture. In the picture Lee Hyori is wearing pajamas while she is hugging her dog Soonshim. Lee Hyori’s hand that is hugging Soonshim’s stomach has a ring on it.

Now Netizens are wondering whether that ring is from her boyfriend Lee Sang Soon or a couple ring. What do you think?

On the homepage for “World Music Travel” (EBS radio show where Lee Sang Soon is the host), a picture shows Lee Hyori as a guest in May 31 of 2011. The post also has text that reads, “Whatever part of her you are looking at she has a special aura. She came in and gave strength to both DJ Lee Sang Soon and also the studio.”

In the picture it seems that the two are actually holding hands behind their back. Whether this is hind-sight bias or not, the two seem to be very happy together.

(Her real name is Shin Soo Jin, and she is a singer, below is a personal favorite that includes her)

In June 2010, Lee Sang Soon and Yozoh met through common friends and began to date. However in April the two officially broke up.

(Interesting no? It appears that Lee Sang Soon moved on within a month or two)

B2M Entertainment (Lee Hyori’s agency) is being more careful with the news and seems averse to any ideas of marriage, “They have been dating for 4 months. However the two are not lovers, it is too soon to tell whether the two will marry or not.”

Regardless, singer Kim Dong Ryul (There was actually a rumor about Kim Dong Ryul marrying Lee Hyori back in July) congratulated the couple through twitter, “As a friend and also a senior, the two are a very pretty and cool couple. I wish that everyone will congratulate and cheer them on with honest hearts!!”

Singer Jung Jae Hyung (Who is close with the couple) also wrote on his twitter, “I read an article that when you two are dating, you ride a Korean car. Common Sense couple, cute.”