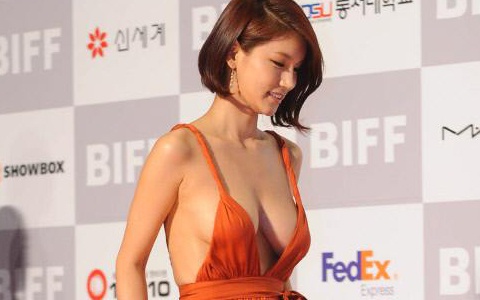 Actress Oh In Hye, who became instantly famous for her extremely revealing orange dress during the 2011 BIFF (Busan International Film Festival), shared her thoughts about revealing her stark naked skin on camera in an upcoming movie.

Oh In Hye got the role of a woman named Susie in the movie “Red Vacance Black Wedding,” produced by Park Chul Soo, Kim Tae Sik. Susie is a femme fatale, with both good and evil traits. In the movie, she will be shooting a drastic and bold scene with a teacher (Jo Sun Mook).

Red Vacance Black Wedding is a collaboration with Park Chul Soo and Kim Tae Sik—a combination of both of their ideas, all tied with a string of black comedy.

On November 30, the Red Vacance Black Wedding premiere, Oh In Hye, An Ji Hye, Lee Jin Joo, Jo Sun Mook, and other key actors and actresses will be attending.

Oh In Hye said, “I was really worried and I felt a lot of pressure shooting a nude bed scene in my first movie. However, I felt that I could trust Producer Park Chul Soo, and decided that the movie wasn’t about the nude scene—but rather, the nude scene was for the movie.”

“I didn’t worry too much about it, and decided to do it in a day. The producer explained to me in extreme detail what I needed to do in the bed scene. The representative Jo Sun Mook also helped me so it wasn’t too difficult.”

Oh In Hye also talked about her dress during the 2011 BIFF, “I did not choose that dress so that I can get attention for the movie. I felt really hurt and depressed when I saw anti comments and bad comments about me, but I guess I’m happy since I’m gaining exposure. I feel that I communicated with the audience well, and it was a good memory. My personality also became a lot more indifferent about the matter.”

She added, “I watched the movie on the big screen for the 4th time and I really like it. The more I watch the more I enjoy the film. I hope you will all support me! Thank you.”

The movie will premiere on December 8.

Oh In Hye
How does this article make you feel?