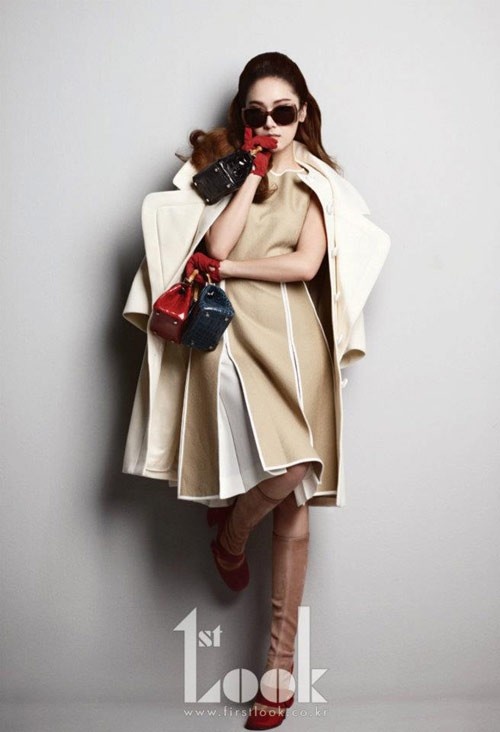 SNSD’s Jessica As a Posh Housewife, “I Don’t Hate My Ice Queen Image”

SNSD’s Jessica became the cover girl for the magazine “First Look” on December 1. The concept was “Break the Ice” where she would break away from the image of an ice queen (typically the image that she portrays of being cold), and looked more like a posh housewife. (The actual Korean term is Cheongdam-dong Daughter-In-Law, and it is used to describe the rich housewives in South Korea that live in the most expensive district.)

Within the picture Jessica was basically luxury itself. She wore a beige one piece and a white coat on top. She also wore leopard sunglasses and brown long boots. Then she finished off the look with red gloves and held 3 different mini todbags.

She also showed off her different feminine charms. In another picture, she wore a white one piece that showed off her glamorous bodyline. Her hair and also the clutch she is holding complement each other well.

In the magazine interview she talked about her cold image, “I don’t really hate my ice queen image that much,” “If you look at it in a bad way it means I am cold and haughty, but I think all girls need to have an image that appears not easily reachable.” She continued, “The more activities I engage in, the more I am showing my emotions. If there is something funny going on, I almost fall backwards laughing.”

1st Look
Jessica
How does this article make you feel?