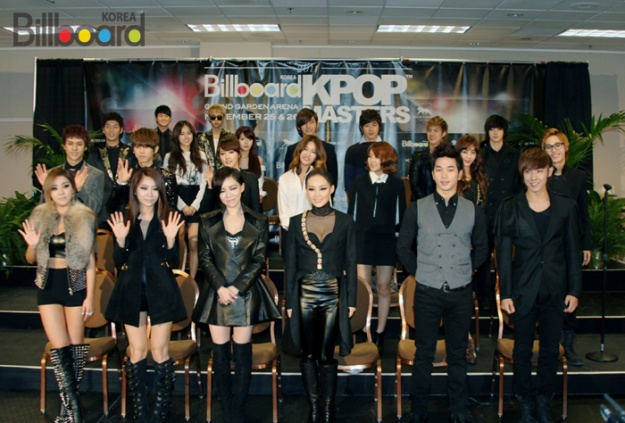 “Arirang~ Arirang~” reverberated throughout the MGM Grand Garden Arena on November 25-26. 8 different K-Pop groups became one voice and sang the traditional Korean song “Arirang” as an encore for the 2011 Billboard K-Pop Masters Concert. Many viewers shed tears during the moving moment, as a new chapter of K-Pop opened up in the Hearth of U.S. pop music.

The 2011 Billboard K-Pop Masters concert was an event celebrating the launch of the Billboard K-Pop Chart. (Launched on August 26) The 8 K-Pop teams that helped celebrate were DBSK, SHINee, Brown Eyed Girls, MBLAQ, BEAST, SISTAR, 4minute, and G.NA. They sang a total of 33 songs and were able to meet U.S. fans. The fans greeted their K-Pop stars with towels, sticks, and handwritten placards. The shouts of “I Love You” echoed throughout the concert.

Here is a description of the concert itself:

The JabbaWockeeZ dance crew opened for the November 25 concert. The dance crew was created in 2004 and became popular when they won the “MTV America’s Best Dance Crew.” Currently, their show in Las Vegas is always selling out.

After the Jabbawockeez heated up the stage, BEAST was the first K-Pop group to perform. They performed their upbeat songs “Breath,” “Shock,” “Fiction,” and “Beautiful.”

Afterwards SISTAR who received number one when Billboard K-Pop first launched went up the stage. They sang, “How Dare You,” “Ma boy,” “So Cool,” and “The Real Party” leaving a strong impression on K-Pop fans.

The Canadian born G.NA connected with fans through her exceptional English. G.NA performed “Black & White,” “Banana,” “I’ll Leave So Have a Good Life,” and “Top Girl.”

The concert reached its peak when SHINee and DBSK appeared on the stage. SHINee performed “Sister, You’re So Pretty,” “Ring Ding Dong,” “Hello,” and “Lucifer.”

Last but not least, DBSK’s Yunho and Changmin performed “Maximum,” “Before U Go,” “Keep Your Head Down,” and “Rising Sun.” They proved that they were a veteran group of 7 years.

A member of the audience, Stacy K Gelly stated while giving a thumbs up, “K-Pop gets to you through the heart, instead of your ears. I felt a vibration that spread throughout my heart.”

4minute commented after the concert, “It is such an honor that we got to sing at the MGM Grand Arena, where many popular world stars had performed before us. Looking at the U.S. fans that were following along to the songs in Korean, made us experience that Hallyu (Korean Wave) is not a bubble.”

Brown Eyed Girls stated, “It was the first time we visited LA. We are so happy that Billboard Korea and MGM worked together for this opportunity to introduce K-Pop in this magnificent city. If we ever get the chance, we wish we could come to visit overseas fans.

Billboard Korea’s President Ahn Jung Dae stated, “I am overjoyed that the 2011 Billboard K-Pop Masters was a success in Las Vegas. I anticipate that this would have been a moment that succeeded in introducing K-Pop to the U.S. market.”