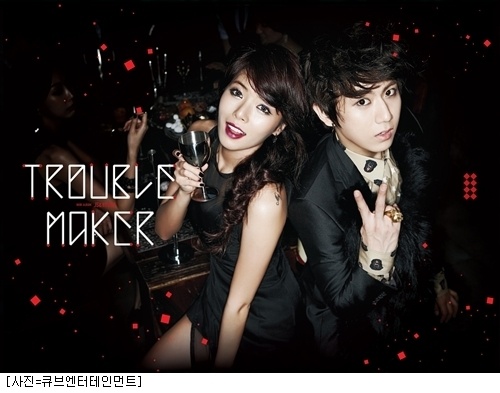 On December 2, Troublemaker‘s Hyun Seung and HyunA met up with reporters for a brief interview discussing their unit venture together.

Asked about his much talked about stage name, JS, Hyun Seung said, “I wanted to use a stage name because I was a bit disappointed in debuting with my real name under BEAST. Our CEO originally told me that he’d think about it if I came up with something cool. I’ll explain the meaning behind JS on my Twitter after our first stage.”

On his unit group, he commented, “Personally, I’m glad that I can finally show everything that I’ve been wanting to express. I paid particular attention to my live and rehearsed a lot for it. I also worked with the stylist for our outfits, so overall, a lot of my opinions are reflected in our style.”

He continued, “I was glad to have a lot of time to rehearse on my own while the other members were pursuing individual activities. I admit that there is a part of me that’s addicted to work because sometimes I’d feel nervous when I’m not rehearsing.”

HyunA dropped in to add, “Oppa is a workaholic, to the point where he’ll rehearse up until the early morning.”

On being compared to Lee Hyori, HyunA said, “Just the comparison in itself is a great honor, but to me, I think that she’s someone that could never be overcome. I wish to just appeal to everyone with my own charms. Senior Hyori actually monitored for me a lot during my ‘Bubble Pop‘ promotions, which I’m very grateful for.”

Continuing, she added, “I think my own charm is that I’m different on stage and in variety shows. It’s been three years since I’ve debuted with 4minute, and every time I become wrapped in a controversy that deems me as too sexually suggestive, I realize to myself that people have that much more interest in me. The 4minute members will often tell me, ‘No matter how hard you try to act sexy, you’re still cute to us.'”

“I think that I’m regarded in a bigger light than what I truly am. In a way, I think that you have to be bigger than who you are on stage in order to be professional. I’ve been dancing since I was nine. Naturally, instead of dancing to a pre-set choreography, I like to just go with the flow. Maybe that’s what people feel is too sexy.”

Finally, the duo was asked about their steamy kiss on stage at the “2011 Mnet Asian Music Awards.” HyunA commented, “It was the first time I was so nervous since my debut. My legs were shaking. The kiss was first suggested by our choreography team. We had no idea that it would cause such a reaction. I didn’t feel it on stage, but after I came down, my legs were shaking so hard. I guess you can consider that stage the spoiler to our Troublemaker stage.”

Hyun Seung added, “When I first heard that we’d have a kiss scene, I was surprised and thought it’d be awkward. After practicing a lot, it became easier. I know that people have a lot of different opinions on kiss performances, but personally, I think it’s cool. As long as you find a center in yourself, it can be regarded as just another performance.”

CEO Hong Seung Sung also commented, “Troublemaker is our first unit group, and we definitely have plans for more unit groups in the future. Like Troublemaker, the other unit groups could consist of one male and female, or be all-male units or all-female units.”

“I think the both of us match each other well in a variety of aspects. Our personalities and the way we express things, as well as the music we like all fit together well. It’s not a group comprised of BEAST’s Hyun Seung and 4minute’s HyunA but rather a new image belonging completely to Troublemaker,” the duo concluded.

Troublemaker will be making their debut through SBS‘s “Inkigayo” with their title track, “Troublemaker.”

4Minute
BEAST
Hong Seung Sung
HyunA
How does this article make you feel?