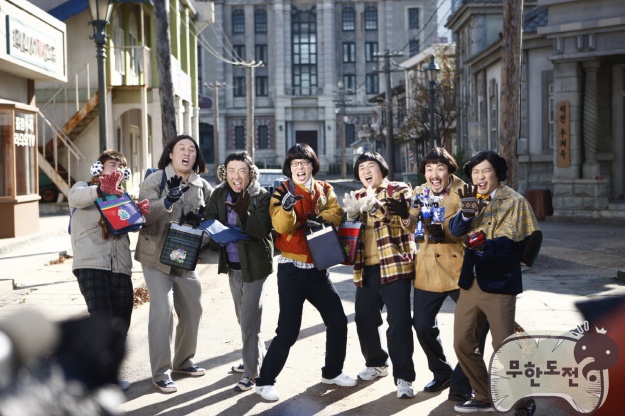 A day is way too short when you are having fun. The days when you were happy as long as you had your street friends by your side. Back to the 80’s, the “Infinity Challenge” members go back to the days when they were 12 years old. Their fun day begins.

#The afternoon full of memories.

“We will be your friends now.” 12 Year Old Kid Myung Soo always enjoyed playing by himself. Thus the members have set out to give Myung Soo the gift of childhood memories. He is a leader even in the streets,

With items such as the “Mymy (Similar to a Walkman)” and the legendary car, the “Granada,” the place is full of memories from those bygone days. They begin to engage in long conversations as they bring up their memories one by one. The Infinity Challenge members begin to talk about their childhood.

Mr Fox~ Mr Fox~ What are you doing?♬

The game “Mr Fox, what are you doing?” have been upgraded for the modern era. They also begin to cry in mourning at the death of the frog. Myung Soo falls into a cultural shock seeing everyone else play games with each other without issues.

“I still enjoy being by myself.” Because Myung Soo isn’t having any fun, his six friends prepare something ambitious. All you need to do is to draw one single line, “Run with one foot.” There is even various ways of drawing this line. Also there are no rules for this game. It differs completely according to what town they lived in. They set out to pick the tagger but start to have a passionate debate about the method and way of saying “Let’s flip hands.” The crisis gets to the point where they even get the staff to vote for it.

#The battle with the pride of a men at stake, the game to win the rubbers!

Myung Soo has never had a birthday party, so they have prepared a surprised birthday party. It’s a birthday party filled with foods such as a cake and chickens. Myung Soo and friends are extremely happy. Let our friendship last forever. Also the story behind the birth of “Infinity Challenge” is revealed for the first time.

They eat the snacks from the past and start a small game of “Win the rubbers.” However the game gradually becomes more and more heated. The Seven 12 Year Old Kids, but they show off a childlike desire to not lose. Eventually even the proper kid Jae Suk loses his cool. It’s a grim battle for victory that even has a sense of tension in the air. They will stake everything for the victory. Eventually the battle of the rubbers turns into a catastrophe.