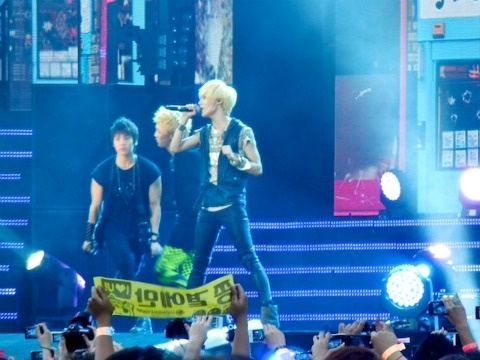 Entering the concert a few weeks ago as a K-Pop fan was truly an experience. Hundreds of fans were seated in the gigantic ANZ stadium, covering the entire floor and flooding the stands. As we waited in anticipation for the groups to come on stage, the MBC cameras swiveled around the crowd, broadcasting the variety of fans present on the day for all to see – from screaming fan girls, to hardcore coupling fans (the huge TaeNy sign comes to mind), to parents with young children lucky enough to experience something so exciting early in their lives. Finally, a countdown appeared on the large screens. History was about to be made.

Various scenes of all the groups lit the screens as the numbers flashed, 3… 2… 1… The stage opened, it was SHINee. As promised from a show in Sydney earlier in the year, they were back – and back with a vengeance. The excitement seemed to overcome almost everyone present, as the crowd leapt off their seats and realised it was happening – a K-pop concert in Sydney.

Of course, that was only the beginning with eleven other groups making the event one to remember no matter your bias. SNSD, KARA, 4 Minute, Secret, Sistar, and miss A redefined girl power while bringing blood to the noses of the masses of fan boys, while BEAST, MBLAQ, 2AM and CNBlue assisted SHINee in making fan girls and boys alike destroy their voice boxes as they projected their excitement.

However the event was not only about idols, but a celebration of 50 years of diplomatic relations between Australia and South Korea. Naturally, cross embracement of Asian and Western cultures ensued as CN Blue lead singer Yong Hwa gave shout outs to AC/DC, while both Kylie Minogue (an Aussie!) and Beyoncé were both covered.

Once the night was over, it still felt merely like a dream. To have so many groups of such high caliber in one place at one time is amazing, but to have them in Sydney Australia was literally a dream come true for more than 30,000 fans. While unlikely to occur again on such a scale for a long time, it surely put Australia on the map as the full effect of the Hallyu wave was experienced by everyone at ANZ stadium on that special night.

Missed out? Do not be too jealous, the 2011 K-POP Music Festival in Sydney was surrounded with MBC cameras, and on December 4, the experience is going to be aired in full on MBC at 11:50pm KST! So tune in, fire up your streams, and enjoy!

SHINee
2AM
BEAST
KARA
MBLAQ
miss A
Secret
SISTAR
How does this article make you feel?