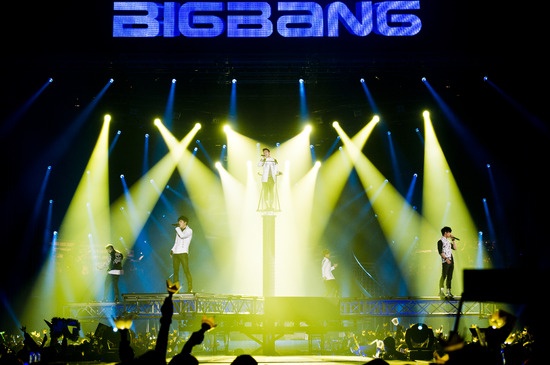 G-Dragon and Daesung Apologize to Fans at YG Family Concert

At the YG Family Concert, G-Dragon and Daesung spoke for the first time about the unfortunate incidents that happened over the past year. All five Big Bang members performed together for the first time since their “Love Song” promotions earlier this year.

After singing “Tonight,” T.O.P first opened up by saying, “It’s overwhelming to have all five Big Bang members back together on the same stage,” bringing tears to thousands of fans in attendance. “I’m happy to be on stage to celebrate YG Entertainment’s 15th year anniversary. This past year was a busy and eventful year for YGE, yet you all stood by us and supported us and we’d like to thank you for that.”

Daesung added, “It’s really been a long time since I performed on stage. I’m just happy to be here. The hardship I went through gave me a chance to realize how precious music and the stage are to me. I’ll always be thankful to go on stage.”

G-Dragon also said, “I’m so sorry for causing so much trouble because of my mistake. I’ll make sure not to have the same thing happen again. I think the only way to show my appreciation is to come up with better music and performance. I’ll do my best to give a big present to the fans.”

Daesung stopped all Big Bang activities after the car accident in May and G-Dragon has been involved in a marijuana scandal last October, stalling all promotions as a group.

Today’s concert was part of the annual YG Family Concert that began since 1997. This year marks the 15 year anniversary and featured all of the top YG artists, including 2NE1, Gummy, Se7en, JinuSean, Psy, and Tablo. The next YG Family concert will be held in Osaka on January 7 and 8, followed by two concerts in Tokyo on January 21 and 22.