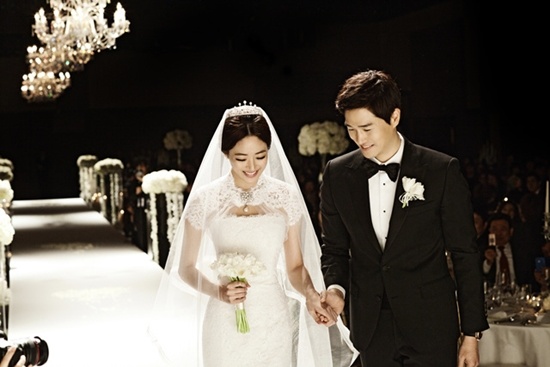 Mega stars Yoo Ji Tae and Kim Hyo Jin’s wedding took place on December 2 at the Shilla Hotel in Seoul. After five years of dating, the two have finally tied the knot.

Check out some of the photos below!

SNSD’s Sooyoung chose to wear tight, gray skinny jeans to emphasize her long, shapely legs. She enhanced her feminine image with a simple black, short peacoat with a belt tied around her waist.

Choi Siwon is looking dapper in that gorgeous 3-piece suit!

Perhaps it’s true when they say that lovers grow to resemble one another! Tablo and his wife, Kang Hye Jung give off identical smiles and waves. Both are also sporting semi-formal blazers and circle-rimmed specs.

Jung Woo Sung gives an intense gaze as he mixes up tones of gray and black to give off a simple but fashionable look.

Han Hyo Joo gives off an icy charm in an all black ensemble with a gray scarf warmly wrapped around her neck.

Go Soo looks like he is giving a forced smile but he still looks handsome in his simple black suit. He added the final touch of a white pocket square to complete his look.

Park Jung Ah dresses up in an all-black outfit and sports a chic shortcut that shows off her feminine charms.

The bride specially requested for Bada to sing the congratulatory song for the wedding. Bada chose a short, black minidress with a lace fringe at the hem and layers it with a black and white striped coat.

Look who it is! It’s Bae Seul Ki, also dressed up in a simple, black and white outfit.

Lee Chun Hee mixes up different tones of gray for a clean-cut and simple look.

Cha Tae Hyun wishes the couple a long and happy marriage as he sports a fitted suit with matching tie and pocket square.

Kim So Yeon fiercely looks over at the cameras in her all black ensemble. Check out her leopard print heels.

Unlike most of the guests, Lee Yoon Ji decides to go with color – she sports a bold, red high-waist skirt with a black and gold top and matching heels.

Song Yoon Ah breaks the rules and wears a white wrap dress that hugs her curves – she looks great for her age!

Au contraire to Jo Dong Hyuk‘s facial expression, he brightens up his black suit with a exotic, colorful tie and pocket square.

It’s a rare public appearance by Kim Jung Hwa, who chose to dress up in bright, flashy colors to brighten up the crowd!

Can you say aww? Jinusean’s Sean shows up with his two sons – all of them look quite dashing!

Park Jong Hoon comes to congratulate his juniors on their marriage.

One of the brides closest friends, Yang Mi Ra stays low-key in this black and white outfit.

You wouldn’t say much just by looking at So Yoo Jin‘s upper half of the body but once you peer down – bam! Look at those metallic leopard print skinny pants!

Ahn Sung Ki has still got it! He appropriately dresses for a December wedding by accessorizing his suit with a warm scarf.

Han Jung Soo admits that while he is happy for the couple, he is jealous of his buddy Yoo Ji Tae since he is still single. He sports a navy suit with a fashionable purple tie.

The bride and groom share their first kiss as husband and wife.