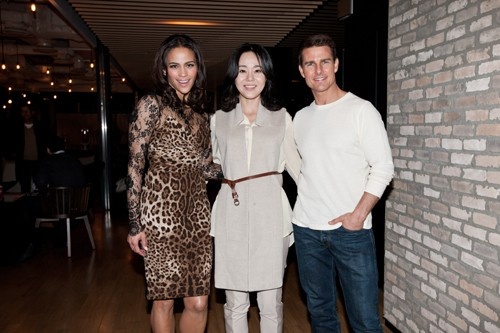 Tom Cruise had a surprise meeting with actress Kim Yun Jin. A representative of the film, “Mission Impossible: Ghost Protocol” stated on December 8 that, Kim Yun Jin met with Tom Cruise and Paula Pattonon December 2, for a premiere press conference.

Bryan Burk gave out a personal invitation to Kim Yun Jin, and after the premiere press conference, Tom Cruise, Paula Patton, Kim Yun Jin, and the director of Ghost Protocol Brad Bird all had the chance to chat.

Kim Yun Jin told Tom Cruise, “I am a huge Mission Impossible fan, I think this is the best out of all of them.” Tom Cruise told her in response, “I was a big Lost fan. I really enjoyed the show.”

Kim Yun Jin
Tom Cruise
How does this article make you feel?