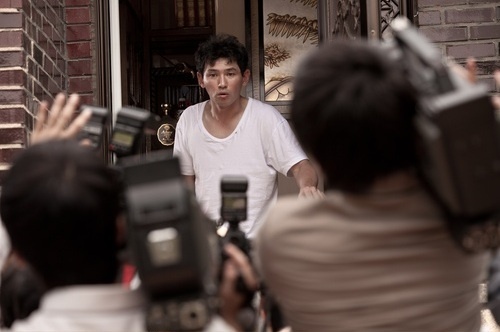 Hwang Jung Min in a Comedy Role for "Dancing Queen"

The actor Hwang Jung Min will play a comedy role in the film “Dancing Queen.” He will play a lawyer who barely passes the bar exam after 8 tries. Although he is an average and modest living lawyer, through circumstance he gets the chance to run the Mayor of Seoul

The film will show Hwang Jung Min playing against the typical image of a Mayor. Instead of keeping a graceful composure, he will show a more peasant-side and appeal to Seoul citizens.

Representatives of the film have stated that the after watching Hwang Jung Min act, they thought to themselves, ‘This scenario was made for Hwang Jung Min.’

Hwang Jung Min stated, “I think a good movie is something that makes viewers have fun and be happy. The film staff was a lot of fun, and I had an entertaining time while filming ‘Dancing Queen.’ I believe the movie will make the people who watch it, happy.”

The film, “Dancing Queen” will be released in January of 2012.

Dancing Queen
Hwang Jung Min
How does this article make you feel?