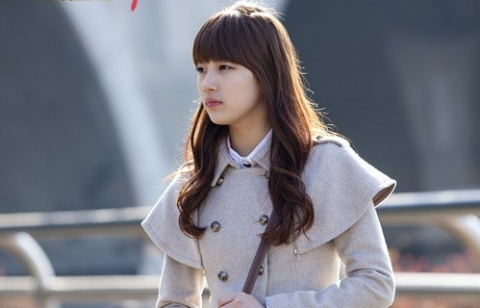 miss A’s youngest member Suzy (17) is under scrutiny for wearing a revealing, see-through outfit. On December 8, a photo of Suzy at a rehearsal surfaced various online communities. In the photos, Suzy is wearing a bold, see-through top. From the front, it looks like an average knit; however, the backside revealed her entire back and bra. Many netizens expressed their discomfort in seeing a high school student wear such a revealing outfit.

Some of the netizens’ comments included, “See-through on a high school student just doesn’t seem right,” and “even though she’s a celebrity, this is just too much.” On the other hand, some defended the young star saying, “She pulled off the look well. “

The screen captures were taken from Monday night’s episode of Mnet’s “Wide Entertainment News,” where they went behind the scenes at the “2011 Mnet Asian Music Awards.”

Meanwhile, Suzy is busy filming her debut film, “Introduction to Architecture,” with stars Uhm Tae Woong, Han Ga In, and Lee Je Hoon. Shooting began on October, and the film aims to premiere sometime within the first half of next year.

What are your thoughts? Is this see-through look appropriate or inappropriate for someone as young as Suzy?