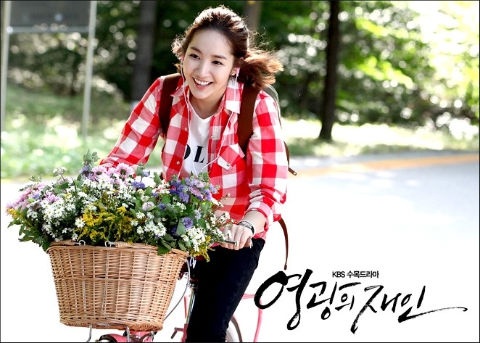 I’m sure many of you, like myself, felt that “Glorious Jane” (a.k.a. “Man of Honor”) slowly lost its steam over the past couple weeks. But woah…did you guys see yesterday’s episode? Jae In finally learns the entire truth about her family, and boy is she mad…Hmm…mad might be an understatement…How would you feel if your father was unjustly killed, your mom in a coma for the past 17 years, and you abducted…

After 17 long years of separation, mother and daughter are finally reunited. Unfortunately, the emotional reunion is cut short as Yeo Eun Joo falls back into unconsciousness after a meek attempt at stabbing Seo Jae Myung. She wasn’t going for the kill…or was she, but I find it rather stupid of her to waste the little strength she had on something she knows isn’t going to “kill” him. Why didn’t she bide her time, gather enough strength (to at least be a physical threat…she could barely stand without using up all her energy, yet she was screaming, “I’m going to kill you!!!” Neither very convincing nor smart Ma…you just hinted to Seo that you may be a “potential” threat), and think of a reasonable, strategic way of taking Seo Jae Myung down? I mean, that’s what I would do. The company is still full of people who are sympathetic to her late-husband and her family. Anyways, going back on track, Jae In is pretty shaken up as she sees her mother back in a comatose state. Not only that, she finds out what really happened to her father, mother, and herself 17 years ago on that fateful, rainy night.

She storms into Seo Jae Myung’s humble abode and yells for him. She confronts, “Did you kill my father? Why did you do it? Did you want the company that badly?” When Seo Jae Myung justifies it as an accident, she rightfully ignites, stating that he ripped apart her family. She continues by saying while he and his family lived such grand lives, her father remained trapped in that cold lake and her mother slowly withered away.

Seo Jae Myung flips his lid, declaring “The company was mine to begin with. Don’t turn the blame to me. Your father was weak and indecisive.” Incredulous at his relentless attitude, she smacks his face and says, “Shut up! Don’t you dare say anything about my father!” The well-deserved slap symbolizes her official declaration of war/revenge against Seo Jae Myung. However, one can’t help but be skeptical of how “successful” she’ll be. Sure, justice is always served in kdramas. The good always wins in the end, and the evil is shown its place…cough cough…not so much in the real world… but I’m sure Jae In will be conflicted with In Woo in the picture. He definitely did not follow in the footsteps of his father, with good reason too. He’s caring, sweet, and although he’s bratty, there’s a boyish innocence to him. While she doesn’t like him romantically, she’s definitely grown fond of him as a friend. Once the initial feelings of betrayal washes over her, she’ll definitely feel conflicted in taking down his father.

“Glorious Jane” came in second place in the Thursday night ratings race with 14.2% (AGB Nielsen), a slight increase from its previous episode’s. Jang Hyuk’s “Tree with Deep Roots” came in first with 21.7%, and Lee Ji Ah’s “Me Too, Flower” recorded 6.3%.

For those of you who have been following the drama, what are your thoughts? Did you like the episode? What dramas do you want us to cover? Consider this your open thread to rant and rave about the memorable scene of the day!

Check out yesterday’s edition of MSD!