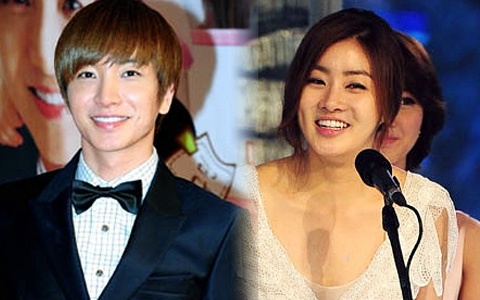 [Recap] Super Junior’s Fighting Junior, Leeteuk, and Kang Sora on We Got Married

On December 10, on We Got Married, Fighting Junior members showed up to talk about a secret mission with Leeteuk‘s virtual wife, Kang Sora. Fighting Junior consists of Donghae, Kyuhyun, Eunhyuk, and Sungmin.

Prior to their meeting, Leeteuk was walking around with a life-size cut-out of Sora, and talking to the poster in a funny manner.

Leeteuk made the audience and the members laugh by saying, “People might think I’m a crazy person, but sadly it’s true.” He looked crazy indeed, carrying around a life-sized poster and talking to it as if it were a real person. One of the security guards that was passing by looked at him questioningly.

On the other hand, Sora showed up secretly to the members’ backstage rooms, and handed them 6-year-old ginseng drinks. They made new nicknames from the show that Donghae was in, called “Jjak” (Couple), labelling each Fighting Junior Member as numbers in age-descending order. Sora was the 5th member, so she became 5-ho (means number 5, but is pronounced as Oh-ho, appended with “hyung-soo-nim” which means sister-in-law). When she bribed them with ginseng drinks, she asked for couple of favors that she wanted to do with Leeteuk, such as giving him a romantic back-hug, a massage, delivering facial oil paper, lip balm, spoon-feeding him food, wiping his sweat, and etc. The members in return asked for a so-gae-ting. A so-gae-ting is a get-together where guys and girls, who usually do not know each other, at similar age meet up to possibly start dating or become girlfriends and boyfriends.

Sungmin said that he wanted a small girl that could fit right into his arms. Eunhyuk funnily mocked him by saying, “You want her to be 137cm tall?”

Eunhyuk said that he wanted a girl that has white skin and big eyes, and Donghae copied what he said right after. Kyuhyun funnily added, “Go make your eyes bigger before that!” to Eunhyuk. Eunhyuk shily said, “Choi Jung Hyun is the celebrity that I like.” The We Got Married staff added, “Then the girls are going to have to be twins!”

Kyuhyun said that he would like a girl that has a pretty forehead. He commented,”I think girls with pretty foreheads look beautiful with all-back hair.”

Shortly after that, she quickly went out to keep this meeting a secret. Soon after, when Leeteuk came in with the life-size poster, the Fighting Junior members were playfully acting disgusted(?).

Sora nonchalantly showed up again with cutely labeled burgers for the members. The labels said, “Leeteuk ♡ Kang Sora, We got married!”

Although the couple stopped speaking in honorable form last week (the way you speak to elders or people you aren’t close to), Leeteuk talked shyly in honorific form when she showed up. Sora also brought a cute labeled grape drink labeled “Yeo-Bong (sounds like Yeo-bo, which means honey or dear in Korean).” The drink had a cute letter which read, “It’s kind of awkward to suddenly stop in honorable form. Oops! I forgot to say hi! Hi Oppa! Cheer up with this drink, yeobo! I hope you perform your concert well!”

They showed their cute affection for each other – Sora brought a chair for Leeteuk since he was standing there. They also held hands, but the Fighting Junior members were horrified(?). They jealously mocked Leeteuk by reenacting the hand-holding in a funny manner.

Leeteuk shyly avoided her eyes and spoke to her in non-honorific form by asking, “How were you the past week?” They talked and talked, until Sora asked him, “What is this?” pointing at the cut-out of her from the Busan International Film Festival. He said, “Isn’t she pretty?” She laughed and asked, “Where do you use this poster?” He funnily answered, “I keep her in my room. I speak to the poster and I eat with her,” making the audience burst with laughter.

He also asked her, “Did you miss me?” and she cutely said, “Yes, I missed you!” He carefully told her to come to the concert on Sunday (for the special event that he prepared for her)!

They came out of the backstage room to practice on the actual stage, and Sungmin comicly carried on the back-hug mission, while Leeteuk looked puzzled. Eunhyuk brought him a loving(?) water bottle.

What do you think of Fighting Junior and their antics? How cute are the Leeteuk ♡ Kang Sora couple!

Super Junior
Donghae
Eunhyuk
Kyuhyun
Sungmin
We Got Married
How does this article make you feel?