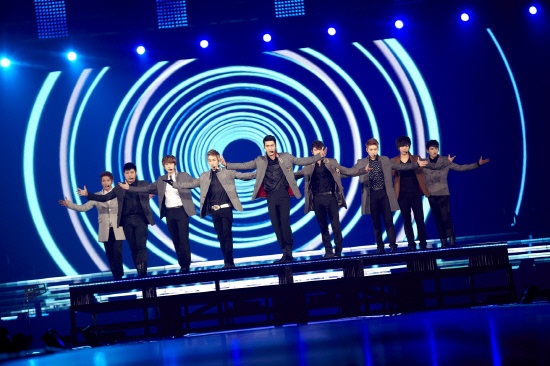 As expected, Super Junior, the leaders of the Hallyu wave, has topped Japan’s Oricon chart for the first time since their debut!

On December 11, officials of Oricon announced that Super Junior’s December 7 release, “Mr. Simple,” had ranked first on the daily single chart, effectively making it the group’s best achievement since their Japanese debut.

At the time of its release, the Japanese version of “Mr. Simple” ranked second, achieving 35,854 units in sales and lining up against major names in Japan like AKB48.

This is an especially meaningful feat in that the boys had yet to start any major promotions for the album. Aside from concerts, they have not been on any special Japanese TV shows, relying just on their Hallyu power alone.
In comparison, Super Junior’s first single, “Bonamana,” which was released back in June, debuted at second on the Oricon daily chart, showing that the boys are moving up the ladder.

To add to the great news, Super Junior also sold out their Osaka Dome concerts on December 10 and 11, bringing together over 80,000 fans!

The “Super Show 4” made a stop at the Osaka Kyoceradome where they performed their hit songs like “Sorry Sorry,” “Bonamana,” “Super Man,” and a special stage with f(x) as guests, “Oops!” The group managed to sing a total of 38 lives, including the members’ individual stages.

Japanese fans were also in for a treat, as the group sang Japanese versions of “Mr. Simple” and Super Junior-M‘s “Too Perfect.”

A lot of heavy equipment were brought in to truly bring out the charm of the concert, including cranes, wires, lasers, fountains, and cable cars, truly making it a large scale concert.

Fans showed their support with their colorful placards and blue light sticks all throughout the concert. At the end, the members said, “It’s an honor to be able to perform at such a big concert hall. We’d like to thank everyone for creating such great memories with us.”