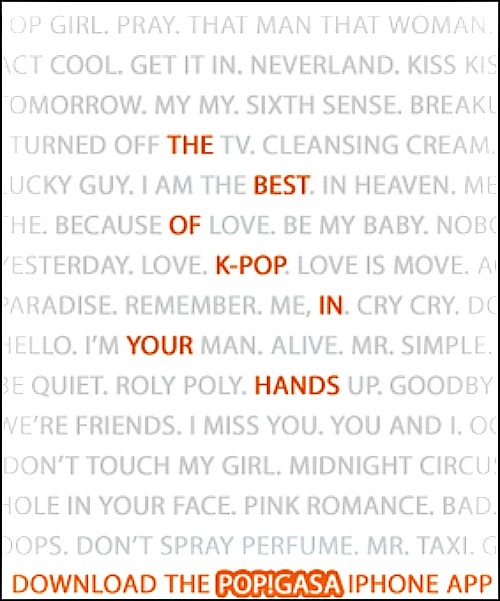 How many times have you wondered if Taeyang wanted YOU in a wedding dress? Or have you ever stopped and thought maybe IU was professing her sweet love to you?

Well, wonder no more, for there’s an app for that.

Pop!gasa is a website founded by two avid K-Pop lovers, who realized there was a growing group of fans who shared their love for the music, but may not understand what their idols were singing. They noticed that there were many K-Pop lyric romanization sites but not many sites that are solely dedicated to fast and accurate translation lyrics. So they decided to take matters into their own hands and their hard work transformed into http://www.popgasa.com/, a website where they do their part in sharing the love by ferociously uploading accurate English translations for the freshest of K-Pop tracks.

Pop!gasa has just launched an app that brings (the words from) the lips of your favorite K-Pop star to the touch of your fingertips. The app is broken down into sections of Artists, Song Titles and Show Titles, making it very easily navigable. Any one can search, browse, and even make personal favorite lists from scores of lyrics, which continue to grow. Also, the app makes it easy for you to share your favorite lyrics with your friends through the social media functionalities (Twitter, Facebook, e-mail). With high functionality and great aesthetics, the pop!gasa mobile application brings the best of K-Pop into your very own hands.

Upon the release of the app, pop!gasa has garnered much attention from various media outlets such as Korea Times, Game Chosun and Coca News. The pop!gasa team has even been featured and interviewed on a Korean radio show, TBS Weekend Edition. Word has even spread to the K-Pop blogosphere, proving that the pop!gasa app has high potential to be of great assistance and guidance to the millions of K-Pop fans all over the world.

Word is that the Android version is already in the works, but anyone with an iPod/iPhone/iPad can access the app on the go, for any k-pop lyric crisis to be had. The pop!gasa app is currently FREE for a limited time. After this sale is over, the pop!gasa app will be available for 0.99 cents.