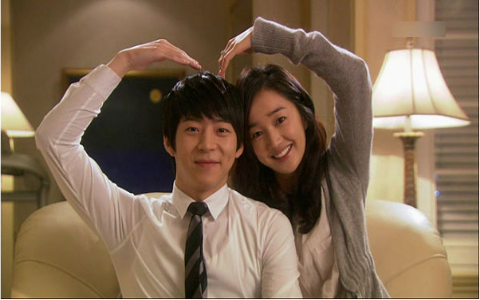 It doesn’t come as a surprise that this episode was a tearjerker. It’s been getting worse by the episode, but what can you expect when you know that there’s no possible way for our main characters to get their happily ever after. There were so many memorable scenes in last night’s episode, and a whole lot of emphasis on family and mothers. With her baby on the way – as well as her imminent demise, Seo Yeon has been thinking a lot about all the mother figures in her life – the biological mother who abandoned her and her brother, her Aunt who raised them like her own, and herself who raised her younger brother. “A Thousand Days’ Promise” is one of those dramas that makes you reflect back on your own life and think of all those who are important to you.

After a house-warming party with several of Seo Yeon’s ex-coworkers and Jae Min, Ji Hyung and So Yeon are busy doing the dishes. When she sees Moon Kwon back from work, she states, “Let’s take pictures. Don’t say no. I want to take some before I’m no longer myself.” The two siblings pose affectionately, and So Yeon fondly pecks Moon Kwon on the cheek. Satisfied with the shots, she asks Moon Kwon to print them to which Ji Hyung pipes up, “What about me? Are you playing favorites? Aren’t you worried that I might get pouty?” So Seo Yeon and Ji Hyung take pictures as well, and she looks happier than she’s been in a long time.

While Moon Kwon is in his room printing the photos, Seo Yeon approaches him and apologizes, “I’m sorry. I’m really sorry. I haven’t expressed much of how I felt. I wanted to make you a capable, confident, decent man.” He tells her that he has never been able to meet her expectations, but she tells him she only acted coldly because she wanted him to grow stronger and succeed. She continues to apologize for raising him harshly and that she didn’t know she would end up like this. Fighting tears, Moon Kwon tells her “You don’t have to say these things. I’ve always understood why you purposely acted like a harsh mom. That’s why I didn’t run away or throw tantrums when I wanted to.”

Seo Yeon tells him that she’s proud of Moon Kwon and makes him promise that he’ll continue to be strong even when she’s no longer here. He tells her not to worry, and she responds, “Look into my eyes and promise me.” She then goes on to apologize for feeding him only water and for lying that they’ll have gogi (beef) once mom returned. This last sentence is basically what made this scene so memorable. Even after twenty-so-years, she’s still full of guilt at not being able to feed her younger brother when they were abandoned. Even at a young age – when she too needed a mother – she felt the need to mature and take on the responsibility as the motherly figure to her younger brother. Can you imagine waking up one day, finding your mother gone, and realizing that you had to mature and take responsibility for not only your life, but also your younger siblings? And all that before you’re ten let alone twenty years old?

hotshotlover30 is the senior editor for soompi.com. You can email her at hks33@soompi.com, or follow her twitter.com feed at @hotshotlover30