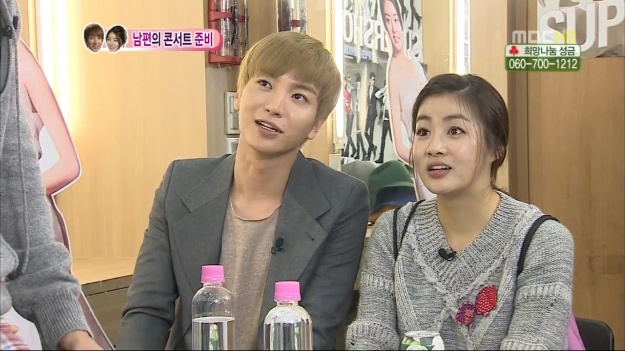 Lee Jang Woo – Ham Eun Jung Couple’s segment will not be shown on Episode 113, airing on December 17. The staff apologizes to the viewers and asks for your understanding.

So Hyun – Won Joon Couple are participating in a cooking competition so they can both participate in a special challenge. Won Joon has recruited a teacher(?) that is especially matched to their style. Who is the cooking teacher for the day that has gladly agreed to help the couple out?

It’s a cooking competition where a main and assistant cook participate in a single team. So Hyun and Won Joon, which of the two has their skills acknowledged by their special tears and gets the honor of being the main cook?

After several days of practice, it’s finally the momentous day of the cooking competition. The flustered couple start to mix up about recipe order and get lost trying to figure out how to use the cooking utensils. Will they be able to complete cooking all their dishes within the time limit and what will the judges responses be to So-Won couple’s dishes? What ranking will the couple get?

Sora has decided to go watch Super Junior’s concert. While her husband is busy with press conferences and concert preparations, Sora has appeared at the concert hall with a present that is catching the eyes of all the fans. What is Sora’s present?

Sora finally enters the concert hall. The concert starts and she enthusiastically cheers them on. Will the Super Junior members be able to carry out the special mission they promised to Sora? At that point, husband Lee Teuk’s solo performance begins. What is the final momentous event that he had secretly prepared?

After the concert, Sora secretly goes and meets the other Super Junior members. She is practicing a melody of Super Junior dances with the help of the members, for her husband’s sake. The members state that this process was harder than the concert itself. What will Sora’s dancing be like and what will Lee Teuk’s response be?

Kang So Ra
Kim Won Joon
Park So Hyun
We Got Married
How does this article make you feel?