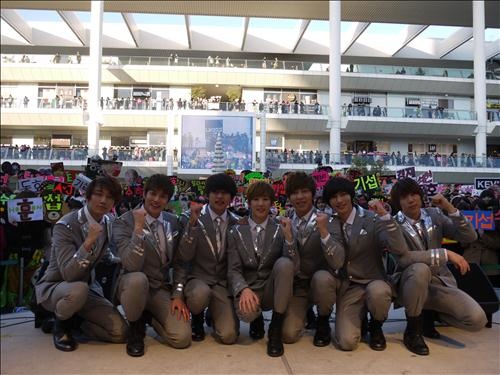 U-KISS is on a roll! Now that they’ve placed third on the Oricon chart and placed first on Tower Records in sales with their debut single, “Tick Tack,” the boys are ready to take Japan by storm.

At the Lazona Kawasaki Plaza in Japan, U-KISS held their debut event on December 17, in which they performed their new dance track, “Tick Tack,” and the Japanese ballad version of their Korean hit, “0330.”

Over 6,000 fans showed up to the event, with the majority of them being young women in their 20’s. Considering that they’re the main fanbase for idol groups lately, U-KISSis definitely on the right track in terms of climbing the ladder of Hallyu.

“I’m always warm because I have all of my fans,” leader Soohyun said, expressing his gratitude. When asked what he wanted for Christmas, he said, “Dear Santa, I would like to place first on the Oricon chart.” Fans immediately erupted in applause and cheers at the wish.

When told that they had placed third on the Oricon daily chart, Kiseop said, “We’re really glad for that.”

After the event, U-KISS said, “It’s an honor to finally make our debut in Japan. We’re glad that our fans are showing us so much support. We’ll work harder so that we can make our fans happier.”

The boys concluded the event with a high touch event, thanking each of their fans for buying their album.

U-Kiss will be releasing their second Japanese single in February, along with a nationwide tour, “U-KISS First Japan Live Tour 2012“, which begins on March 2.

Kiseop
Soohyun
U-KISS
How does this article make you feel?