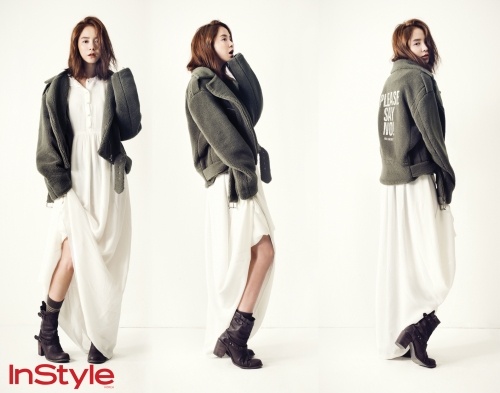 Song Ji Hyo shows off a different side to her in an upcoming spread for InStyle Magazine Korea. Dubbed “Dreamy Charm + Slender Legs,” InStyle Magazine reveals a few of the shots taken of the former model, actress and variety star.

In Song Ji Hyo’s InStyle pictorial, she wears fashion by five designers, featuring fake fur. She imbues the shots with a dreamy appearance and accentuates the luxurious fashion by flaunting her slender, sexy legs.

The actress has captured the public with her versatility. She has just wrapped the 36-episode historical drama “Gye Baek,” starring as Gye Baek’s last empress Eun Go. In contrast, she is more boyish and competitive in SBS’ Sunday variety “Running Man,” where she is the only female cast member.