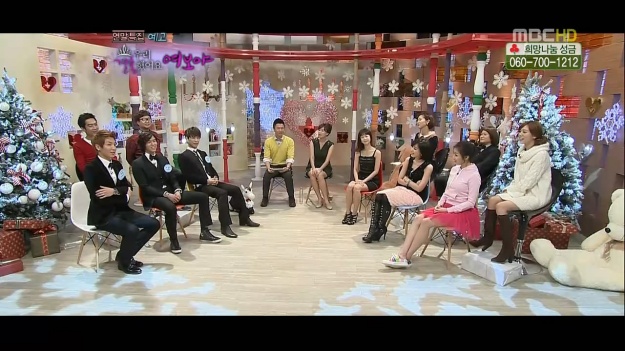 End of year special, “We Got Married.”

The three couples have gathered for an end of the year special. They all head to the dressing room one at a time unaware of this fact. There they have their first unexpected meeting. What will this awkward first meeting be like?

Each couple’s greatest scenes, which have been the talk of town up until now, will be revealed. They will also be playing a game using the long biscuits, which causes the mood in the studio to heat up. The Woo-Jung couple is the couple you think of most when you think of a game like this, but is there now a super couple that is even better at this? Who will be the couple that eats the long biscuit in the most passionate way?

No one can avoid this moment of truth. Nothing is more accurate than this. It boasts an accuracy rating of 200%. It is the lie detector game. What was Lee Teuk’s secret date that caused Sora to suddenly become angry?

The husbands have prepared a romantic event battle for their wives. The Sora Song made by modifying the Number Song, the unexpectedly heart-warming guitar performance and the self-created song for So Hyun. Not wanting to just be on the receiving end, the wives show off a new side to themselves. Their performance causes the husbands to go wild. What will each of the 3 wives’ unique dance performance be like?

Kang So Ra
Kim Won Joon
Lee Jang Woo
Park So Hyun
We Got Married
How does this article make you feel?