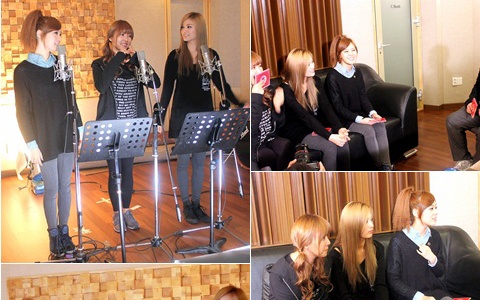 Orange Caramel showcased a different look at the recording of “Funny Hunny.” Although Orange Caramel is usually known for their extravagant and bold outfits, they wore comfortable leggings along with t-shirts and over-sized knits.They released this new video of their new song “Funny Hunny” on December 26.

In the video, they look refreshing and adorable in their regular clothes. It looked as if their outfits were planned amongst themselves, seeing that they all wore leggings. The three all wore black tops, but Lizzy and Nana wore gray leggings, while Raina wore black leggings along with comfy sneakers.

The netizens that watched this video commented, “They’re gorgeous no matter what they wear. They’re as pretty as the Orange Caramel on stage,” and “They feel friendly because they’re wearing comfortable clothing.”

Orange Caramel’s “Funny Hunny” has a theme of the Euro-disco from the 80’s. The beat is addictive with funky and retro styles, and was composed for the general public. This song is the title song of producer Jo Young Soo’s “All Star” album.

Orange Caramel
How does this article make you feel?