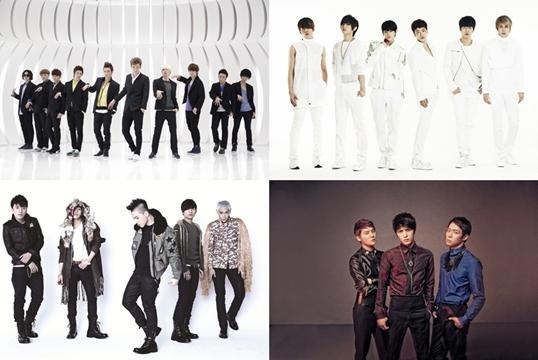 This year, Asia lead the conquest of Europe by bringing K-Pop to the masses. From SMTown in Paris, United Cube in London, JYJ concerts in Spain and Germany, to BIG BANG winning the MTV EMA in Belfast, then the SMTown held in New York and the United Cube in Brazil, it proves that K-Pop is ready to take over the globe. And their next target is the Latin American market.

Super Junior, BIG BANG, BEAST and JYJ, four of the top idol groups in Korea, are preparing a massive expansion, this time is Latin America’s turn. Recently, the last K-Pop concert to be held took place in Brazil with the United Cube concert. It became a huge success and after seeing the massive popularity and positive response, BEAST announced their World Tour to be held in 21 countries worldwide. Dates in Latin America are being confirmed while the arrangements of the venues and places are set.

SM Entertainment is also working to put on some Latin American dates on Super Junior’s World Tour schedule. SM officials stated that “due to the massive request we receive from Latin American fans, we are thinking on preparing Super Show 4 in Latin American countries.”

Meanwhile, YG entertainment is also planning to hold a concert in Latin America. A representative of the company said: “BIG BANG will be releasing a new album in March of next year. They will make a tour and take the “Big Show” further. We haven’t confirmed any country yet but we are looking to expand our concerts to Latin American countries.”

While these three groups are still planning on dates and venues, it seems that JYJ has confirmed a tour that will be held in three different countries in Latin America by February or March. Representatives of C-Jes Entertainment will be traveling to Latin America to conclude with the negotiations of the concerts. The countries with most opportunities of being selected are Brazil, Chile and Peru but there isn’t anything confirmed yet.