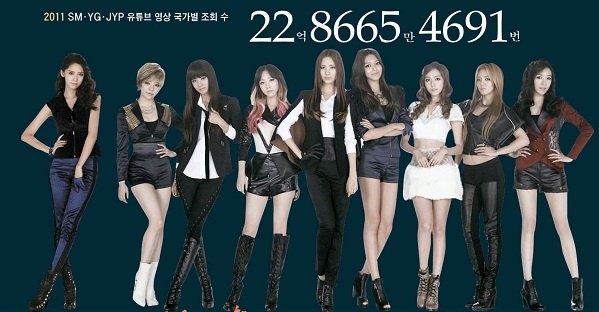 K-Pop has taken the world by storm last year, and the movement was clearly evident in the total number of views K-Pop videos have generated over the past year on YouTube. It was reported today by local media JoongAng Ilbo that K-Pop videos were viewed nearly 2.3 billion times worldwide in the past year, breaking the previous year’s record of 800 million views by nearly threefold.

According to the report JoongAng Ilbo acquired from YouTube, K-Pop music videos were seen 2.28 billion times from 235 countries during the period of January 1 to December 5. The most clicks came from Japan where K-Pop videos were seen more than 423 million times, followed by the U.S. with 240 million views. Thailand came in at third with 220 million view counts, with Taiwan and Vietnam at #4 and #5 with 180 million and 170 million views, respectively.

Some of the odd countries in the top list were the U.A.E, which brought in 4.8 million views, and Kuwait with 1.7 million view counts, showing K-Pop has made its way into the Middle Eastern market as well. North Korea also saw K-Pop 188 times through YouTube, the report said.

“The year 2011 was the first year when K-Pop really established itself as a global trend, instead of a temporary fad. In 2012, K-Pop will continue to grow its influence around the world,” Google Korea said.

In fact, YouTube has launched its own K-Pop page last month, making it one of the 23 music genres shown separately. With the help of YouTube and SNS channels, K-Pop has been able to target the mainstream U.S. market, which saw the highest growth rate in view counts last year. The 240 million views from the U.S. are more than double the total views from 2010 (94 million). Europeans markets also saw huge growths in YouTube as France, England, and Germany all generated more than 20 million clicks.

“The U.S. and European markets are just starting to open up. The three major labels have been listed on the KOSDAQ market last year, so their business projections are looking good as well,” music critic Lee Dae Hwa said.

Do you think K-Pop is a real global trend or just being overrated? Do you see it growing in 2012?