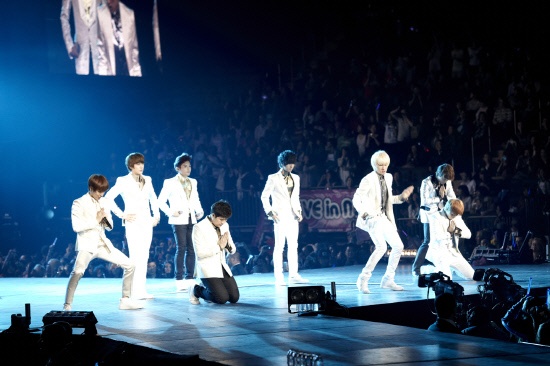 Super Junior set a new record in Taiwan by selling out its “Super Show 4” tickets in less than 17 minutes. The group is scheduled to hold the “Super Show 4” concerts from February 3 to 5.

“The concerts attracted a lot of interest right after tickets were made available on January 1. It’s the first time in Taiwan that tickets have sold out in 17 minutes,” local media reported. No artist in Taiwanese history has been able to sell out a single concert in 17 minutes, much less the 30,000 total seats to both concerts in less than 30 minutes.

The concerts will take place at the Taipei Arena, one of the most popular venues in Taiwan. Due to its popularity, it’s one of the most demanded and hardest places to rent in the country, but Super Junior has been able to secure the arena once again after selling out three straight concerts last March, which was a record for a foreign artist.

Super Junior continues to enjoy explosive popularity in Taiwan with its single, “Mr. Simple,” which has remained the #1 single on Taiwan’s KKBOX weekly chart for 19 consecutive weeks.