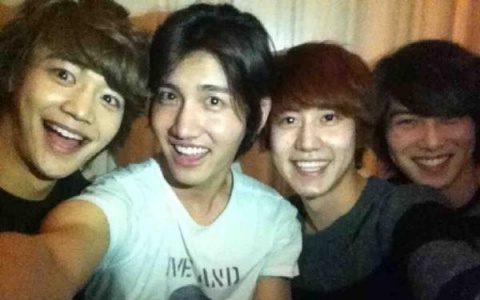 On January 4, Super Junior’s Kyu Hyun uploaded a questionable photo on his Twitter page. In the group photo, Super Junior’s Siwon is seen with three of the infamous “Kyu Line” members, DBSK’s Changmin, SHINee’s Minho, and Kyu Hyun himself.

Kyu Hyun only left a brief caption, saying, “Ah…this….kekeke,” leaving many fans wonder if the photo is supposed to mean anything significant. Some fans went as far as to think Siwon might have joined the already flower boy-packed crew as their newest member.

The “Kyu Line” is a group of flower boys comprised of Kyu Hyun, Changmin, Minho, and C.N. Blue’s Jonghyun. Most recently they were spotted enjoying a year-end party together last week. Who would you like to see join the “Kyu Line”?