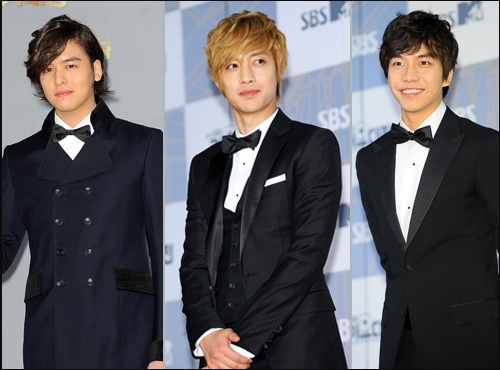 As 2012 begins the start of a new year, people are looking for something new.

One of the many things that will change during the year of the Black Dragon will be men’s hairstyles. Like the styles from 2011, the new styles will still be masculine but upgraded with some flare to give them a touch of chicness and sophistication.

Not too long away, Japanese actor Joe Odagiri was seen at a press conference for the movie, “My Way,” with a new ‘do. This particular cut is only for those men who dare to try something more fashionable. One side of the head is almost shaved, while the other side is long. If you’d like to try something a little more safe, Won Bin‘s hairstyle is a good bet.

The hair in the front is a lot longer than the side and the back. If you want to take it one step further, you can shoot for Jay Park‘s look or Taeyang‘s look. The sides of their heads are shaved while the middle is kept long as a faux hawk. The contrast between the length of the hair gives definition to style. A little bit of gel or hairwax does the trick by keeping the hair in place.

Through MBC‘s 2011 hit drama “The Greatest Love,” Cha Seung Won created a trend with his hairstyle that was continued by actor Yoo Ah In this year. Similar to Won Bin’s hairstyle pictured above, this style features different lengths in the front and on the side. However, the difference is not as noticeable, giving a softer masculine look. Gel it up like Yoo Ah In to give a fresh, chich image or angle it towards your forehead like BEAST’s Kikwang for a pop star look.

You’ve probably seen this haircut countless times over the years because it is so popular. It is called a “dandy cut,” and the hair is cut so that the bangs angle around the eyebrows. Because this look is very soft and gives off a warm feeling, it is recommended to men who have strong facial features.

If cut like Lee Min Ki‘s hair, the hair follows a more round pattern that gives off the look of a young boy. If angled in more of a straight line like Jung Gyeo Woon‘s, it can be permed slightly to give a little more bounce and volume. Lee Jang Woo, SS501‘s Kim Hyun Joong, and Lee Seung Gi also give off “flower boy” looks with their defined waves.

The year of the Black Dragon will definitely bring in new styles. Which one of these anticipated trends looks the best?