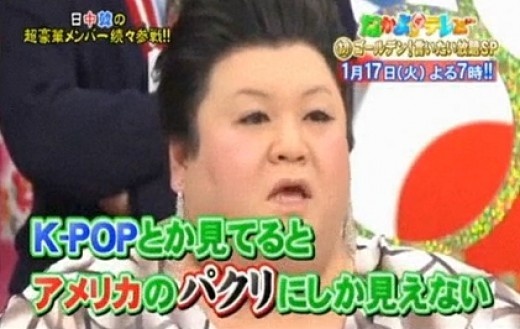 It became an online issue among Korean netizens when Japanese actor Matsuko Deluxe said during a TV show that K-POP is just bad US imitation. He also “kindly” invited K-POP artists to leave the country if they do not like Japan.

According to a Japanase online news, this event happened when the actor appeared on a TV show, “Nakayoshi Televi,” on January 5. During the show different guests from Asian countries, like Korea, China and Japan, had to show their national pride.

During the discussion, Matsuko Deluxe said, “I cannot accept this. In my opinion, K-POP is only a bad imitation of U.S. music.” A Korean-Japanese writer, who was also a guest on the show answered, “Lately, K-Pop has landed even in the U.S. music market. K-Pop is getting highly ranked even on the Billboard charts. However, J-Pop was not able to reach the same level.”

Matsuko Deluxe got angrier and with a louder voice commented, “Japan is embracing different cultures from all over the world including K-Pop. Where do you find such a kindhearted country!? If you do not like our country, just leave!”

Matsuko Deluxe is famous for wearing female outfits and for his spiteful remarks. This news did not appear in newspapers or TV but it was the most read news on Yahoo Japan on January 7. It finally spread online and reached the Korean netizens, who reacted in obvious contempt over his thoughtless remarks.

Matsuko Deluxe
How does this article make you feel?